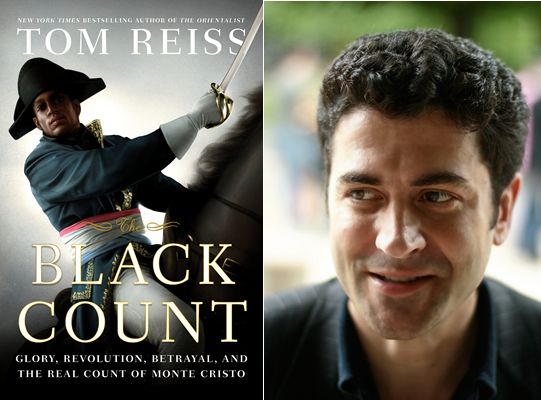 Jeff Glor talks to Tom Reiss about "The Black Count: Glory, Revolution, Betrayal, and the Real Count of Monte Cristo.

Tom Reiss: I was a huge Alexandre Dumas fan growing up, and one day I came across the novelist's memoir. He spent the first 200 pages telling the story of his father, Gen. Alex Dumas, and it read like The Three Musketeers and The Count of Monte Cristo combined - only more outlandish. General Dumas was like some superhero living in one of history's most exciting eras: he sword fought his way across the French Revolution, then he rose from the rank of corporal to four-star general in the space of a year and half on his outsized talents and courage. Here was a guy from the tropics who scaled ice cliffs in the Alps and fought his way across Egypt as Napoleon's cavalry commander. Then, there's the shipwreck and the dungeon.

As an equal fan of history, superheroes, and adventure stories, I was enthralled - and amazed that I couldn't find this incredible man in the history books. I was even more amazed when I learned from a bit of further research that he'd been a black man who did all these incredible things at the height of slavery. Could it be true? And if so, how could such a man be forgotten by history?? I needed to find out.

TR: I've considered myself a writer since I was 7 years old, but I've done a lot of jobs along the way. I enjoyed waiting tables and tending bar during college, especially when it got busy, so I might like managing a big restaurant. In fact, I might like managing many kinds of businesses or organizations. I once started a small business when I got out of college and enjoyed the stress of making it work. High-stress situations clear my head, and I love the challenge of getting along with many different kinds of people. I'm scared of routine. When I was a teenager, I worked summers as a hospital orderly and loved that, and I sometimes wish I could become a doctor, like my father, but I'm not suited to the dispassionate, scientific part.

Basically, I'm tempted by too many jobs. The one thing I'm not tempted to ever do is stop working. Retirement would be too tough for me. As a workaholic and an insomniac, I identified with my subject, General Dumas, who, according to field reports, would ride on patrols without sleep sometimes for two nights on end before going into battle, and winning. But I'm not saying I could be a saber-fighting cavalry officer - that's a job I'd be terrible at! Like the general's son, I'll stick to writing the battle scenes.

TR: I just started Candice Millard's "The River of Doubt." I recently finished her other book, "Destiny of the Republic," which I loved. I'm also reading my younger daughter "The Road to Oz" - I'll take any excuse to reread the Oz books - and am reminded what a sin it is that the series is out of print.

TR: After I finished my last book, "The Orientalist," I did three long New Yorker articles, each of which took me a few months to research and write. I'd like to do some journalism again now before I dive into another book, but maybe some shorter pieces. I need a change of pace.

For more on "The Black Count," visit the Random House website.