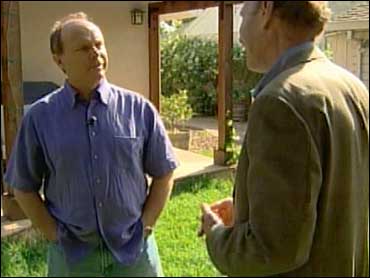 Songbirds provide some of the most welcome sounds of spring. But one northern California man noticed his neighborhood was becoming quieter with each passing year. CBS News correspondent John Blackstone met this very busy backyard bird man who is trying to change that.

Jack Perkins might be considered the birdman of Mountain View, Calif. A self-described casual bird watcher, Perkins began to notice that his neighborhood, once filled with birdsong, was going quiet.

Perkins lives in the middle of Silicon Valley, but the home of the high-tech industry has fewer and fewer places for birds to make their home.

"There's plenty of food in these neighborhoods; what they need is a place to raise their young," Perkins explains.

Many tiny songbirds build their nests in hollowed-out holes in dead trees. But with urban sprawl, most dead trees are cut down, leaving the birds with no place to build their nests. It turns out, however, that for many birds, a simple wooden box is the next-best thing to a dead tree.

Dave Cook of the Santa Clara Valley Audubon Society says the challenge is to get enough boxes hanging in backyards. The boxes, he says, take the place of old dead trees or the cavities found in trees. "They readily adapt. They're not afraid at all," Cook explains.

When Perkins found out about the Audubon Society's nest boxes, he began an e-mail campaign asking neighbors if he could hang a box in their yard. The response was overwhelming.

In one nesting box, seven eggs were laid — a big success story in the neighborhood.

The Keck family got a nest box — and much to the delight of 3year-old Sasha, it quickly became home to two tiny birds.

"Sasha and I were out here having a picnic. I said 'Oh my goodness, look.' And there were two little wrens hopping up and down. They were really industrious building their nest. So excited, she called 'Daddy daddy, daddy! There's birds in my box!'" explains Sasha's mom, Natasha Keck.

"What is it about these birds that captured people's attention like this?" Blackstone asked Perkins.

"It gives a relationship with a wild creature that otherwise people didn't realize they could have in their backyard," Perkins says. "I've met a lot of my neighbors, more than I normally would have, and we have a lot of things to talk about. Like 'You got any eggs?'" he adds, laughing.

Cook says this is beginning to happen all over the country. "And the people who are doing this are not necessarily birders or bird watchers."

Many of the nest boxes Perkins put up are now filled with the promise of new life. But somehow the box he hung in his own backyard remains empty.

"It doesn't really bother me that much, 'cause their eggs are my eggs is kind of how I look at it," he says. "You know, there's always next week!"

Birds can raise two or three broods in a season.

To learn more about birdhouses and birding in general, there are several Web sites with helpful information: