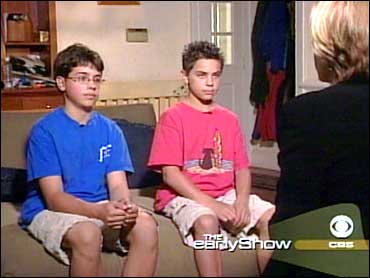 Kids today are bombarded with sexual images, from music videos to lingerie ads and even curvaceous cartoon characters.

While moms usually talk with girls about sex, boys tend to get much less information from their mothers.

How to talk with boys about sex is among the topics in a new book, "From Boys to Men: A Woman's Guide to the Health of Husbands, Partners, Sons, Fathers, and Brothers," which was co-written by The Early Show medical correspondent Dr. Emily Senay.

Most kids aren't nearly as comfortable talking with their parents about sex as the Casparian kids -- Elliott, Will and Sarah. Then again, not every child has a sex educator for a mom.

Dr. Elizabeth Casparian has been called the "Dr. Ruth" of the teenage set. On the " Sex, Etc." Web site, she answers questions about everything from crushes to condoms.

"We get 50 to 75 questions a day from teenagers all over the world," says Casparian.

By the time Casparian's son Will was in sixth grade, he had all sorts of questions. And Will doesn't feel embarrassed asking sex questions.

So how can a family get past the embarrassment and get on with the conversation? The Casparians makes it part of everyday life.

"I remember when we would be in the mall, when we would see huge posters for Victoria's Secret with half-naked women. And I would say, 'Don't you think those women are cold without all of their clothes on?' says Elizabeth Casparian. "I would point things out to them, and we would talk about these things from very young."

Theodore Casparian, the children's father, says, "They would never feel embarrassed about wanting to ask a question. They know learning is a thing we value, and we want them to have good information."

Rev. Debra Haffner agrees. She's the mother of 10-year-old Gregory and the author of "From Diapers to Dating."

"Parents tend to focus on girls because they think boys won't be responsible," says Haffner. "There's really good research out there that tells us when moms talk to their sons about sex, their sons are less likely to have sex. So that kind of communication becomes really important."

Even boys who want to do the right thing can be confused by that old double standard.

"You know, 'Boys will be boys, go out and get some,' all that pressure that men often put on their sons because it was put on them," explains Elizabeth Casparian.

"We need to say to boys and girls, 'We think you're too young to have intercourse until you're 18, in college, married, whatever your family values are,'" says Haffner. "But we also need to tell them that they have to be responsible. And in today's world, every boy needs to know about condom use."

Puberty doesn't just happen with the flick of a switch -- questions occur over time. So, Elizabeth Casparian steers her sons toward Web sites or books.

"They may shove the book under the bed," she says. "In the middle of the night when you're not paying attention, they'll pull the book out and look at it because they're compelled to do so, it's interesting to them."

Senay says that although women are usually the gatekeepers of the family's health needs, educating boys about sex is a job for both mom and dad.

Elizabeth Casparian also points out that mothers should make an effort to know other moms with boys about the same age. That way, they can sit down and talk about their sons' behavior -- the sudden interest in girls, the kinds of questions they ask. She says it all helps to reassure you that their behavior is perfectly normal.

To read an excerpt of "From Boys to Men," click here.