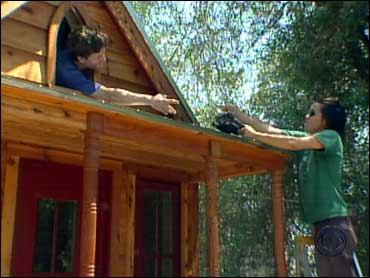 In a nation where homes have been getting steadily larger for decades, Jay Shafer thinks "cozy" may be ready for a comeback.

As CBS News correspondent John Blackstone reports, Shafer builds and designs tiny houses — and lives in one himself.

"The small space is a symbol of something else," Shafer says. "I think it's a symbol of a desire for a more simple life."

The founder of the Tumbleweed Tiny House Company, Shafer has become a sort of guru to a small house movement. For those who have little need for elbow room, he has a whole catalogue of tiny houses. At $20,000 to $40,000 apiece, he'll build and deliver them almost anywhere.

At just 100 square feet, his own house is little bigger than many bathrooms.

Shafer explains, "I have been using the word 'claustrophile' to describe myself and people like me. Turns out I'm not the only person interested in living in smaller spaces."

Arguing in favor of small houses, he notes the time that's required to maintain and clean a large space, and the costs of heat and other utilities.

Some might say living as he does would be lonely, though Shafer says he shared a small house with his ex-fiancée last year.

"A month of living in a 70 square-foot house with two people, it's pretty rough," Shafer concedes.

His houses have been suggested as an alternative to the much-less-homey FEMA trailers provided to hurricane survivors.