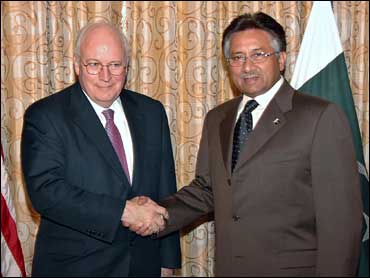 It's a rare day that Dick Cheney gets to play the good cop. Our brooding vice president, after all, is more accustomed to charging liberals with treason in front of like-minded audiences than to engaging in nuanced prodding of old friends. But that is just what seems to have happened during his hush-hush mission to Pakistan this week. Cheney's message to military ruler Pervez Musharraf: Bush and I may still love you guys, but those uptight Democrats in Congress are going to kick your ass unless you get serious about stopping Al Qaeda.

For all the scholarly hand-wringing about the foreign-policy implications of divided government, and all the global bewilderment at how we can have an executive branch that negotiates things like climate treaties and a legislature that proceeds to deep-six them, Cheney's huddle with Musharraf shows that the separation of powers has its charms. It doesn't take a brilliant communications strategist to see that the specter of congressional ire is a big plus when it comes to crafting a nuanced sort of threat. Blaming the opposition party for a bilateral dust-up is the diplomatic version of the classic break-up line: It's not you, it's me. Except that it goes one better: Actually, come to think of it, it's not me, either — it's Nancy Pelosi! Either way, you get to huff and puff and otherwise imperil the relationship without personally spurning the lover (and his ill-guarded nukes).

There's an irony in the Bush administration — and, in particular, Cheney — making such conspicuous use of this old tactic. Ever since September 11, 2001, GOP loyalists have leaned on one simple message when it comes to the politics of security: Only Republicans have the hard-headedness and the backbone to face the menace that is Islamic terrorism.

As Cheney himself put it before the 2004 election, "It's absolutely essential that, eight weeks from today, on November 2nd, we make the right choice. Because, if we make the wrong choice, then the danger is that we'll get hit again, that we'll be hit in a way that will be devastating from the standpoint of the United States." Two years later, while Cheney was accusing Democrats of "resignation and defeatism in the face of determined enemies," the president was even more blunt in assessing the opposition's tactics: "The terrorists win and America loses."

That message gets just a wee bit diluted when the veep pops up in Islamabad to say, more or less, that those same Democrat sissies are willing to be tougher on North Waziristan's putative constabulary than the manly folk of the executive branch.

In Cheney's case, the irony is a lot more apparent when you consider that much of his career has been dedicated to thwarting just the sort of congressional meddling that he used so shrewdly during his Pakistani parlay. As an aide to President Gerald Ford, Cheney unsuccessfully urged a veto of a bill requiring warrants for domestic surveillance — one in a series of measures designed to cramp the White House's ability to act unilaterally against perceived threats. During his return tours in the executive branch, he has repeatedly held the line against legislative buttinskis — urging the first President Bush to conduct the first Gulf war without Congress' approval, asserting the Pentagon's right to not issue military contracts demanded by legislation, and, more recently, stiffing Capitol Hill on everything from energy to torture.

Cheney even resisted congressional micromanagement back when he had the chance to engage in it himself. As The Boston Globe reported in a lengthy examination of Cheney's 30-year history of trying to roll back the post-Watergate assault on the imperial presidency, then-Representative Dick Cheney refused to join in the condemnations of the Iran-Contra scandal, because, he believed, the law forbidding covert aide to the Nicaraguan resistance didn't apply to the president.

Properly used, of course, that very law might have helped the Contras' American friends steer the rebels away from the sort of behavior that disgraced them. It could well have led to a conversation not so different from the one Cheney apparently held with Musharraf: "Commandante, it's Ollie North here. Listen, we'd love to get you those weapons, but all these raping-and-killing stories are really freaking out Dick Cheney and the rest of the gang in Congress. You guys have got to cut that s--t out."

And, in an ideal world, Cheney's sit-down in Islamabad would be the beginning of a whole series of similar conversations in the Bush administration. We'd love to let you slide on the whole exporting-Wahhabism thing, King Abdullah, but that bastard Murtha's really on the rampage. ... Of course, we'd never get upset about a little state-sponsored torture, President Mubarak, but I'm catching all kinds of crap from that zany Henry Waxman. ... If it was just between us, General, we'd say you should just go ahead and death-squad every last one of those "peasant activists." But you know how tough old Denny Kucinich can get.

I have my doubts about whether such strategic triangulation can survive a good old-fashioned opportunity to smear the liberals. But Cheney seems to have played this round fairly well. When the initial news reports about his visit went out, the Pakistani government responded by angrily denying that any arm-twisting had taken place: "Pakistan does not accept dictation from any side or any source," a spokesman said. Meanwhile, aboard the military plane carrying Cheney homeward, a "senior administration official" who seemed freakishly familiar with the vice president's mind denied any unpleasantness had taken place: "I've seen some press reporting says, 'Cheney went in to beat up on them, threaten them,'" the official told a pool reporter. "That's not the way I work. I don't know who writes that, or maybe somebody gets it from some source who doesn't know what I'm doing, or isn't involved in it. But the idea that I'd go in and threaten someone is an invalid misreading of the way I do business." But it's a perfect reading, naturally, of the way the Democratic Congress does business.

By Michael Currie Schaffer
If you like this article, go to www.tnr.com, which breaks down today's top stories and offers nearly 100 years of news, opinion, and analysis

President Biden is expected to rescind the Mexico City Policy, also known as the global gag rule, as part of a slew of executive actions on Thursday, according to two people familiar with the White House's plans.