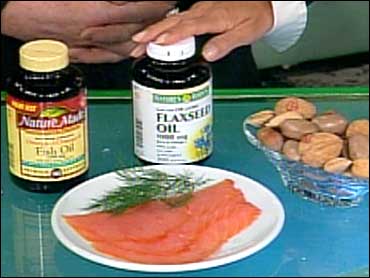 Unlike the typical diet, it doesn't have a catchy name. Nor does it promise you'll drop a size by Saturday. It's not even really a diet, per se, but actually an eating plan for life.

But experts concede that anti-inflammation eating is more effective for some health problems than others - and that the scientific evidence for the disease-reduction benefits of these eating plans is still being gathered.

WebMD rounded up the top experts on anti-inflammatory diets to get some details.

While each plan has its own twist, all are based on the general concept that constant or out-of-control inflammation in the body leads to ill health, and that eating to avoid constant inflammation promotes better health and can ward off disease, says Russell Greenfield, MD, a clinical assistant professor of medicine at the University of North Carolina at Chapel Hill and a private-practice physician who studied under Weil.

"It's very clear that inflammation plays a role much more than we thought with respect to certain maladies," Greenfield tells WebMD.

"We always thought anything with an '-it is' at the end involved inflammation," he says, such as arthritis or appendicitis. But even the illnesses without an -it is at the end, such as cardiovascular disease, certain cancers, even Alzheimer's disease, may be triggered in part by inflammation, he says.

Sears calls inflammation a silent epidemic that triggers chronic diseases over the years. "You could feel fine but have high levels of inflammation," he warns.

The average American diet, Greenfield says, includes far too many foods rich in omega-6 fatty acids, found in processed and fast foods, and far too few rich in omega-3 fatty acids, such as those found in cold-water fish or supplements. When that balance is out of whack, inflammation can set in, Sears explains.

Phytochemicals - natural chemicals found in the plant foods suggested on the diets - are also believed to help reduce inflammation.

Anti-Inflammatory Diets: What Do You Eat?

An exact description of the anti-inflammatory diet varies, depending on whom you ask. The anti-inflammatory diet is "probably very close to the Mediterranean diet," says Christopher Cannon, MD, associate professor of medicine at Harvard Medical School and a cardiologist at Brigham and Women's Hospital, Boston. He co-authored "The Complete Idiot's Guide to The Anti-Inflammation Diet," which includes recipes for anti-inflammatory eating and information on vitamins.

An anti-inflammatory diet is the Zone diet with fish oil, says Sears, who wrote "The Anti-Inflammation Zone" and whose popular Zone diet recommends low-fat protein, carbs, and heart-healthy monounsaturated fats.

Specifics vary from diet to diet, but in general anti-inflammatory diets suggest:


As one example of a day's worth of anti-inflammatory eating, Cannon suggests a breakfast of toasted steel-cut oatmeal with berries, yogurt, or other topping and coffee or green tea. Lunch could be tuna salad on 7-grain bread and a smoothie with seasonal fruits. For a snack, try an ounce of dark chocolate and about four walnuts. Dinner could be spaghetti with turkey meat sauce, spinach salad with oranges and walnuts, and apple cranberry pie made without butter.

The diets don't promise weight loss, but weight reduction does often occur. And that makes sense, given the makeup of the diet, says Greenfield.

"When you are talking about cutting back on red meat, dairy, fats and trans fats, partially hydrogenated oils, highly processed carbs - and eating healthier protein like fish, eating more fruits and vegetables - odds are that people are going to lose at least a little bit of weight."

Where Is the Proof That Reducing Inflammation Works?

Can a diet really affect inflammation?

Proponents say it can, but they acknowledge that the anti-inflammatory diet needs to be studied more extensively to prove that it actually reduces disease such as heart problems.

"But a related diet, the Mediterranean diet, has been and is associated with improved cardiac outcomes," Cannon says.

Greenfield agrees. "There is ample evidence [of disease risk reduction] on the Asian-style diet and the Mediterranean-style diet," he says. "When you take a look at the components [of those diets], they could easily be called anti-inflammatory diets."

And eating a diet high in omega-6 and low in omega-3 is associated with increasing levels of cytokines - proteins released from cells that trigger inflammation - according to a study published in Psychosomatic Medicine.

Omega-3, in doses of 3 grams or more per day, has been found effective for those with rheumatoid arthritis, reducing morning stiffness and the number of joints that are tender or swollen, according to a review of the research on omega-3 fatty acids and health in American Family Physician.

Anecdotally, says Greenfield, he hears from patients that avoiding "inflammatory" foods can help their osteoarthritis pain. He recalls talking to patients with arthritis who have vacationed in India, for instance, eating dishes with plenty of curry, and telling him their joints didn't hurt as much while they were there.

Curry, he says, as well as ginger, is a natural anti-inflammatory.

It's not surprising that anti-inflammatory diets have gotten popular, says Elisa Zied, RD, a spokeswoman for the American Dietetic Association and a dietitian in New York City.

While they may have some merit, she cautions: "Individual foods should not be the focus. You need to pay attention to your overall pattern." And reducing inflammation is not just about what you eat, she says.

"Maintaining a healthy body weight is the best thing you can do to reduce inflammation," Zied says.

Patience White, MD, the chief public health officer for the Arthritis Foundation, agrees, particularly when it comes to patients with arthritis. "The link between weight and osteoarthritis in the lower extremities is very close," she says. "The heavier you are, the more likely you are to get arthritis."

What about the anti-inflammatory diet for arthritis symptoms? "We don't have enough data one way or the other to prove following that diet helps your arthritis," White says.

Until more research is in, he suggests eating a balanced diet, getting enough sleep and exercise, maintaining a healthy weight, and being supervised by a doctor.
By Kathleen Doheny
Reviewed by Louise Chang
© 2008 WebMD, LLC. All rights reserved

Men's Skin May Be More Sun-Sensitive

Germs in the School Room