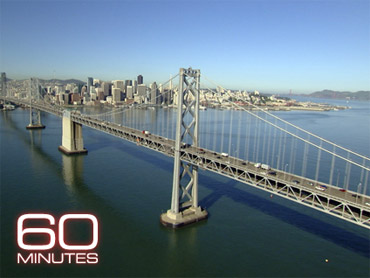 There is no doubt communities around San Francisco Bay are going to be hit with the same kind of catastrophic earthquake that recently struck Haiti, Chile and China.

Most people in the Bay Area know that. But they may not know their most important lifeline to the outside world is also one the weakest: the Bay Bridge connecting San Francisco to Oakland.

In 1989, the Loma Prieta earthquake severely damaged the Bay Bridge. At the time, California's leading engineers said it was a "powerful warning" that the bridge needed to be made earthquake safe. Their report was called "Competing Against Time."

Twenty years later, a new span that is a wonder of engineering is rising across San Francisco Bay. But it's still under construction, and there's a push to finish the job before the next big earthquake strikes.

The Golden Gate is the most recognized bridge in the world and, most people would say, San Francisco's most beautiful. But when you talk about California's economy, the Bay Bridge is the most important. With nearly 250,000 vehicles crossing it every workday, it's one of the busiest bridges in the world.

But, as California Department of Transportation (Caltrans) spokesman Bart Ney explains, here's the problem: "If a very large earthquake strikes now we're going to have trouble with that structure."

"That bridge goes in the water?" correspondent Byron Pitts asked.

"Portions of it, maybe," Ney replied.

Caltrans is the agency facing the challenge of making the Bay Bridge earthquake safe as quickly as possible.

The Bay Bridge is actually two bridges. The western span reaches from San Francisco to Yerba Buena Island and is now stronger. In 2004, Caltrans finished replacing half a million rivets with bolts and added 17 million pounds of extra steel. This span is anchored to bedrock.

But the eastern span, stretching two miles to Oakland, is weaker. It sits precariously atop trunks of Douglas fir trees, which were driven into the mud more than 75 years ago. Despite concerns over its strength, it's still in use while a new bridge is built alongside.

Failure of the Bay Bridge is not just a fear, it's also a memory of what happened in 1989.

"That was the location where we had the failure during the Loma Prieta earthquake," Ney explained, pointing to the upper deck of the existing Bay Bridge. "Literally that top span collapsed onto the lower span."

At 5:04 p.m. on October 17, 1989, as ticket holders were entering the World Series, the ground started shaking. People panicked. On the Bay Bridge, stunned motorists took a video as a woman was killed when she drove off the fallen upper deck.

Sixty two other people died in the quake, most of them when a stretch of the double-decker Cypress Freeway in Oakland collapsed. In less than 15 seconds, the magnitude 6.9 Loma Prieta earthquake injured 3,700 people and caused $6 billion in property loss.

"And people living in the Bay Area said, 'Oh, yeah, we've lived here all our lives. We felt earthquakes, we can deal with earthquakes.' Then Loma Prieta occurred," geologist David Schwartz told Pitts.

Schwartz is on the Earthquake Hazards Team at the U.S. Geological Survey.

He says that as dangerous as Loma Prieta was, it was centered 60 miles away. "If people thought that was an earthquake, wait until the next one happens right here," Schwartz said.

When the Bay Area takes that direct hit from a major quake, many of its roads, bridges and airports will be devastated. People will die. Survivors will depend on a disaster route that connects to the outside world. The Bay Bridge will be the heart of it.

"The Bay Bridge is built to lifeline criteria," Ney explained. "This bridge, unlike almost every other bridge in the state is designed to handle a very large earthquake. And then put back immediately into service. For emergency services. And with a short period of time then be open to the public for the rebuilding effort that will happen in this region."

"The replacement structure that we are designing is really state of the art," Steve Heminger, executive director of the Metropolitan Transportation Commission, said.

Heminger holds the power and responsibility to get the bridge built and paid for. "I'll tell ya, if I'm lucky enough, I wanna be on that bridge when the big earthquake hits," he said.

"I'm not sellin' you on anything. I'm tellin' you that we have spent a lotta money and a lotta time makin' sure that this bridge is strong," he replied.

At $6 billion, this will be the most expensive bridge in U.S. history. The project has created more than 100,000 jobs and is an international effort involving eight countries providing materials and expertise.

Construction on the eastern span began in 2002, as 452 concrete sections were assembled into what's called the "Skyway." It's 1.2 miles long and already finished. It'll take at least four more years to finish the last two thirds of a mile.

When completed, it will be a sleek and modern bridge; at one end is the signature design feature - a single tower, self anchored suspension bridge that will be the largest of its kind in the world.

Its most important feature is what you can't see: a strong foundation of steel pipes pounded 300 feet below the bay.

"The challenge of building a bridge is what you do underneath the water and in the ground. And you can really see the entire structure from looking underneath," Ney explained.

"Well, you can definitely see a generational difference here and a complete different thought in engineering," Ney said.

When the Bay Bridge was built in the 1930s during the Great Depression, it was considered an engineering marvel. The goal was to make it as strong and rigid as possible.

"What we do now is we try and design our bridges so they can move with the motion," Ney explained.

First-of-their-kind innovations are designed to take the brunt of the force, even to the point of breaking, while leaving the rest of the bridge intact.

The broken parts would later be replaced, which is faster and cheaper than fixing the entire bridge. Hinge pipe beams sit inside the bridge and connect the concrete sections of the Skyway while also allowing them to move.

To see the real thing, Pitts and Ney went inside the new bridge.

"The hinge pipe beam is about 60 feet long with a six foot diameter," Ney explained while showing Pitts the inner workings of the bridge. "This portion of it is weaker than either side. And it is designed to bend and deform. This is where we'll take the damage."

At that particular location, Ney said, the pipe beam could accommodate about six feet of overall movement.

Scientists call the Bay Area a tectonic time bomb. Earthquake faults crisscross the region, pushing up mountains and creating the bay itself; the Bay Bridge sits between two of the most dangerous. To the west is the San Andreas Fault, responsible for the devastating quake of 1906 and to the east is the Hayward Fault, just five miles from the Bay Bridge.

"The Hayward Fault sits right in the middle of the Bay area geographically and population wise. Two million people sit directly on top of it. And when it goes, it will be the first major earthquake to occur in the middle of a modern U.S. city. We haven't had that before. We don't know what the results of that will be," Schwartz said.

Asked if such a quake will be devastating, Schwartz said, "It will be something, I think, that's beyond what we really expect."

After the Loma Prieta quake, the report, "Competing Against Time," put Californians on notice that their roads and bridges needed fixing.

"It's what we go back to when we need to remember that we've got to move quickly and we've got to try and get the project completed," Ney said.

"It has been a long time," Ney acknowledged.

Now Caltrans has another race against time with evidence that the existing bridge is falling apart. Last fall, a six-inch crack in a steel beam closed the bridge for emergency repairs.

Heminger is feeling the heat as head of the Bay Bridge project, now ten years behind schedule.

Another reason it's taking so long is a self anchored suspension bridge this big is difficult to build. That's because the main cable isn't anchored into bedrock - it's anchored to the bridge itself.

"To build this type of bridge, you literally have to build two bridges. One that will hold the deck in place until you can put the cable system in later," Ney explained.

The original bridge design from 1997 would've been simpler, cheaper and faster to build. But it was ridiculed as a "freeway on stilts" and rejected by the Bay Area.

"Help me understand why it was so important here to people here that the bridge look nice?" Pitts asked.

But the decision to build an architectural icon didn't end problems - it started new ones. The most bizarre was with the U.S. Navy. In 1998, it refused to let Caltrans onto Yerba Buena Island to finish its engineering work. The Navy's issue was whether the Bridge would overshadow the one-time home of Admiral Chester Nimitz, a hero of World War II.

"We had to come up with a design where we wouldn't cast a shadow down onto that particular property," Ney explained, with the Nimitz home in the background and directly next to the new span. "We had to make sure that the bridge snugged up close enough to the existing one so that we weren't coming over the top of Admiral Nimitz' house."

The year and a half delay put Caltrans into one of the most expensive eras of construction in recent memory. First, 9/11 happened, and overnight the cost of insurance and financing skyrocketed. Then, a building boom in China drove the prices of steel and concrete to record highs. By the time ground was broken in 2002, the price tag of the new bridge doubled.

Since construction began it has doubled again.

"If something else is gonna be faster, simpler to build, why wasn't it just 'Yep, that's the way were going?'" Pitts asked.

"But for those who would say, 'How dare you take that risk with the lives of people who live in this community,' you say what?" Pitts asked.

"I say that what they're gonna have when we are done because of the innovations in this structure is a much safer bridge than if we had rushed our way through," he replied.

"But, God forbid, an earthquake comes before you finish," Pitts remarked.

"God forbid is right. And that's the fear that we all carry every day that we should be done by now, but we're not," Heminger said. "And the one thing we can never know is when that earthquake's gonna hit."