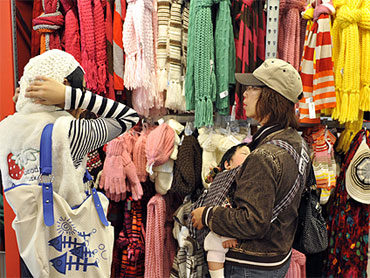 The Early Show has been testing her theory in a series by the same name. Two women, Lirone and Tracy, have been brave enough to follow Carroll's instructions to achieve the much-desired goal.

Their last assignment was to learn how to keep the attention of a room full of men. The ladies had a game night, where they were given different tasks to keep the men's interest level high.

Basing her technique in nature, Carroll tells co-anchor Hannah Storm the key was to seduce and abandon.

Carroll explains, "Think of those nature films where the lioness leads the lion into the bush, lolls back on her hunches with a come hither look in her eyes, and as soon as the lion gets close enough, she swats him with her paw and romps off. By the time he catches her, he wants her twice as madly."

In the same way, the women were made aware of their power to be themselves and at the same time "hang a man over the fiery pit of anticipation, basically, to make him want more."

Both Tracy and Lirone had separate game nights. Before the games began, Carroll assigned the ladies three tasks that needed to be completed by the end of the night.

Most women including Lirone and Tracy make three common mistakes when attempting to gain the attention of many men at once. These three mistakes can be corrected very easily:

Don't Smother Your Favorite
Tracy bordered on too much towards Adam. This is the Biggest, Baddest Don't on Planet Man. Why? Because when you focus all your desires on one man, it makes you become kind of paralyzed. Tracy was almost unable to move. And when a woman becomes paralyzed, she loses the tantalizing charm that attracts the man to her in the first place.

Don't Ignore Other Men
At Tracy's party, many of the men were all great. Turning away men is not a smart technique. Don't pass up the opportunity to spark with another wonderful guy. Tracy's assignment was to entice all the men her natural, innate Seduce-And-Abandon skills. But she was so busy making sure he was having a good time, the other guys actually became bored. She missed a huge opportunity to drive her favorite guy mad with desire, by engaging the other men.

Don't Overdo The Attract-And-Retreat Maneuver
It is a very, very powerful weapon. It entices a man, it fascinates a man, it holds him in thrall. Overdoing it has the opposite effect. It can turn him off. It should be employed with a light touch. It should just be a flick of come-hither, a brief and saucy dollop, and then move on. Lirone over did it a few times. And even though she is a psychiatric social worker, a serious woman, she came very close once or twice to looking like a bit of a tease.

In the coming week the ladies need to narrow the field down to three men. They will learn how to not intimidate men by focusing on their female assets.

Carroll says, "We're going to go on three outings and learn how not to intimidate the men by using all the arrows in your quiver."

The following is a refresher of the weekly goals.