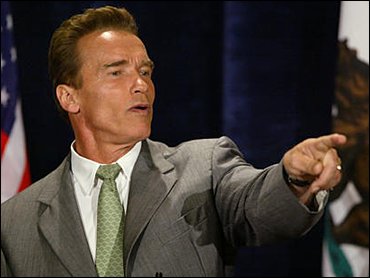 This commentary from The Weekly Standard was written by Erin Montgomery .

On October 11, the Chicago Tribune editorialized that the United States has more important things to worry about than whether or not to amend the Constitution to allow foreign-born citizens to run for president: "This is a nation of immigrants, of course, and one that offers more opportunity to immigrants, naturalized citizens or not, than any other country in the world. But is it imperative that such opportunity extend to the highest office in the land? Is that critical enough to take the extraordinary step of amending the Constitution for only the 28th time in 216 years? The short answer: No." The Tribune continued, "It is more important . . . to retain the sense that the Constitution is not subject to cutting and passing at will. It is the bedrock of the nation's laws, and amendments should be restricted to matters of the greatest import."

Is the Tribune's "If it ain't broke, don't fix it" approach a reasonable one, when our nation's immigrant population is at an all-time high? And should one Constitutional clause -- "No person except a natural born citizen, or a citizen of the United States, at the time of the adoption of this Constitution, shall be eligible to the office of president" (Article II, Section 1) -- keep a slew of bright, foreign-born Americans from running for the office? Among those barred from the presidency are Michigan governor Jennifer Granholm, a Canadian-born Democrat; Labor secretary Elaine Chao (Taiwan); Housing and Urban Development secretary Mel Martinez (Cuba); former secretaries of State Henry Kissinger (Germany) and Madeleine Albright (Czechoslovakia); and of course, California governor-elect Arnold Schwarzenegger, who told CBS, "I have no interest in running for any higher office." Not that he has a choice.

But on July 10, 2003, Orrin Hatch, chairman of the Senate Judiciary Committee, took action against what he calls "an anachronism that is decidedly un-American." He introduced a bill that would allow a person who has been a U.S. citizen for 20 years and a resident for 14 years to run for president. Schwarzenegger recently celebrated his 20th year as a U.S. citizen, though employees of the Senate Judiciary Committee, where the bill currently stands, says the birth of Hatch's bill had nothing to do with the political aspirations of the Austrian-born muscleman. While introducing his "Equal Opportunity to Govern" Amendment before the Senate, Hatch said that perhaps the most disturbing aspect of our Constitution as it reads today is that "scores of foreign-born men and women who have risked their lives defending the freedoms and liberties of this great nation remain ineligible for the Office of President." More than 700 recipients of the Congressional Medal of Honor have been immigrants, he added. The amendment, which some have dubbed the "Arnold Amendment," would have to be approved by two-thirds of the Senate and House and three-fourths of the states.

Rep. Vic Snyder introduced a separate, yet similar, measure in the House a month earlier. Co-sponsored by Rep. Barney Frank (D-Mass.), this amendment would require a person to have been a citizen for at least 35 years in order to run for president. Under the House version, Schwarzenegger wouldn't be eligible until he was 70. (Before the new California governor-elect was even elected, Frank lamented that Schwarzenegger may hurt the effort more than help since "he is a pretty polarizing figure.")

University of Alabama historian Forrest McDonald is adamant that the Constitution remain unchanged. While testifying before a House subcommittee three years ago, he recalled that delegates to the American Constitutional Convention of 1787 feared foreign influence, especially after Austria, Prussia, and Russia "rigged the election of a new monarch in Poland, subsequently dividing the hapless nation among themselves." It was this fear, as well as the founders' concern that a European monarch, such as a relative of King George III, might be imported to rule America, that prompted the formation of the natural-born citizen clause. Naturalized citizens are "bound to be influenced by nativity, whether in the form of hostility or favoritism," McDonald told the House subcommittee.

Many immigration officials also say immigrants always have emotional ties to the country of their birth. And even if a foreign-born president judged fairly in a dispute between the United States and a home country, he still might have to grapple with a public perception of bias, McDonald told the Los Angeles Times. The professor also worries about a foreign government planting an agent in the United States, and grooming him to one day run for the presidency. "As commander in chief, it is not enough to be above reproach, one must be above the suspicion of reproach," McDonald says.

Still, the language of the Constitution implies that foreign-born citizens are less trustworthy than native-borns. As a nation founded by immigrants, do we have the right to maintain that the more than 12 million Americans who were born elsewhere and who pay taxes, serve on juries, vote, and die in combat cannot have the same opportunities? On the other hand, how do we measure patriotism, and is it a compelling enough reason to amend the Constitution?

When we consider how slow-moving the legislative process has been for both bills, such questions begin to sound premature. The Legislative Status Office at the Senate says Hatch's bill is still in the Committee on the Judiciary. No action has been taken since it was first introduced in July. As for the House bill, it was referred to the Subcommittee on the Constitution in June, but a hearing has not yet been held. Neither bill is scheduled for committee action at this time.

Erin Montgomery is an editorial assistant at The Weekly Standard.