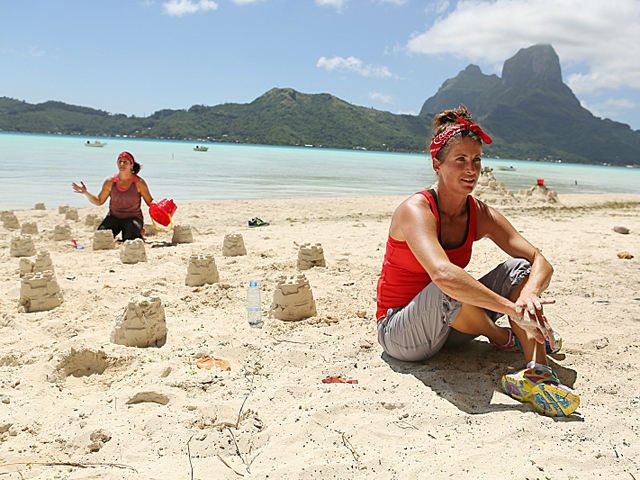 Eleven new teams embarked on a race around the world on Sunday's premiere of "The Amazing Race," with their first destination being the island of Bora Bora.

Sun and sand in the South Pacific certainly sounds nice, but the heat thwarted not one, but three teams from finishing one of the season's first challenges.

Let's start back at the starting line: Host Phil Keoghan introduces this season's teams, which include:

The race started in Los Angeles at the Griffith Observatory, where Keoghan informs them that whichever team wins this first leg of the race will receive two Express Passes -- one to keep, and another they must give to another team before the fourth leg of the race.

Teams run down from the observatory and drive to the L.A. airport, where there are two different flights headed to Bora Bora. The five teams that make the earlier flight are the Alabama couple Chuck and Wynona, doctors Idries and Jamil, buddies Pam and Winnie, father and son Dave and Connor and dating couple Jessica and John. They all make a pact that if one of them gets to the Pit Stop first, they'll give the additional Express Pass to the team that arrives next.

Once in Bora Bora, one member of each team had to skydive out of a helicopter hovering 10,000 feet above the ground. Only two people can go up in the helicopter at a time, which puts some space between the groups. The other members of the teams traveled via water taxi to meet their partners where they landed.

Once back on the ground, teams traveled to Eden Beach for a Road Block. Whoever didn't skydive had to take this one -- digging through 400 sandcastles to find a clue buried beneath, and rebuilding each sandcastle that is knocked down.

As time passed and the scorching sun baked the sand, those doing the challenge got more and more frustrated. Once they did find one of the buried clues, teams had to assemble an outrigger canoe and paddle a mile across a lagoon to the Pit Stop at Motu Cafe.

Jessica and John make it to the Pit Stop first and win the two Express Passes. Hockey players Bates and Anthony, who were on the second Bora Bora flight, came in second, followed by father and son Dave and Connor (they were on the first flight, so they'll be expecting that second Express Pass to go to them). Pam and Winnie arrive fourth, then the derby moms, the YouTube hosts, married Alabamans and the doctors.

Meanwhile, the country singers, firefighters and newlyweds are still struggling with the sandcastles. They decide, as a group, to call it quits, take the penalty for failing to complete the Road Block and let a footrace to the Pit Stop decide who stays and who goes home.

Firefighters Matt and Daniel got their canoe off the beach first, but struggled to keep from capsizing. The other teams beat them to the mat, and they were sent home.

What do you think of this season's "Amazing Race" teams? Vote in our poll for who will win, and be sure to come back next week for another recap.