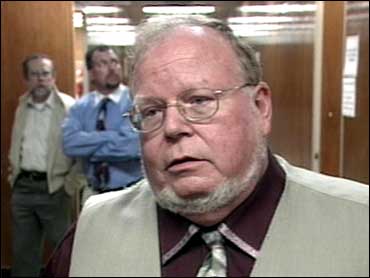 When their son-in-law David Camm was arrested, Janice and Frank Renn couldn't believe it.

"I just couldn't believe that the person I knew, thought I knew, could do that," says Kim's mother, Janice Renn.

But in the 15 months between the killings and the start of Camm's trial, the Renns have become convinced that their son-in-law is a murderer.

"There's no way you're going to bring the kids back and my daughter back," says Kim's father, Frank Renn. "No way, no matter what they do with David. But he'll have to suffer, when he dies someday - if it's soon or if it's 40 years from now - he's got to answer to God.

The murders of Kim, Brad and Jill Camm have gripped this small Indiana town. And as the trial begins, defense attorney Michael McDaniel knows all eyes are on the courthouse, and on his client.

"Right now, David is the only one out there that they can punish," says McDaniel.

"My life is on the line," says Camm. "I'm not just fighting for me, it's not just me, I want justice for my wife and my children."

David Camm and his supporters believe they have a strong hand to play in court. Eleven witnesses put him at the gymnasium at the time of the murders.

With all those witnesses, prosecutor Stan Faith has a lot of talking to do to convince a jury Camm could have committed the murders.

His first theory was that Camm committed the murders between 9:23 and 9:30 p.m., minutes before he called police.

But scientific evidence put that theory in jeopardy. The blood in the driveway, which had coagulated and separated before police arrived, proves the family was murdered much earlier.

"These folks had to be killed a couple hours before David got home -- would've been killed while he was playing basketball," says McDaniel.

Then Faith discovered evidence that challenged the theory that the murder happened at 9:30 p.m., and putting Camm at home two hours earlier.

Faith has a phone record that proves Camm made a call from his house at 7:19, placing him at the scene at a time Faith now believes the murders were probably committed.

"We have a piece of evidence that's objective and it's recorded that indicates that he was in the house before 7:30 p.m. and gives a precise time," says Faith.

It's a phone record that Faith says proves Camm made a business call to a contact from his house at 7:19 p.m., just a few minutes before Kim and the kids arrived at home.

But if Faith is correct, Camm would have to have left the basketball game less than 15 minutes after arriving.

Yet all 11 witnesses say he was at the basketball game that started at 7:15 p.m., and that there was no way he could have made that phone call.

It seems hard to believe, but five weeks after the surprise 7:19 p.m. phone call was introduced, defense attorney McDaniel dropped his own bombshell. He discovered that the phone company has trouble telling time.

"What you had was an hour's difference between real time and the time that appeared on the phone records," says McDaniel.

As it turns out, it all appears to be a huge mistake. Indiana is one of two states that has two different time zones. Camm's home is in one time zone, but his cell phone company's computers are in another time zone.

A phone company employee testified that a glitch in the computer's computer resulted in an incorrect time on the bill - and that David's phone call was actually placed at 6:19 p.m., well before his family returned home.

It could have been all over for Faith, but he had one more card to play. He says he has scientific evidence, tiny droplets of blood on David's T-shirt and sneaker, that removes any reasonable doubt.

Crime scene reconstructionist Rod Englert of Portland, Ore., believes that every blood stain tells a story. He says high velocity blood splatter, blood that has been hit by something going very fast, like a bullet, is the key to solving this murder mystery.

Englert, who was hired by the prosecution in the Camm case, examined the T-shirt David wore the night of the murders. He found eight tiny dots, which he identified as high-velocity blood spatter.

"This is so unique and so separate from other stains that one can say with confidence, that this is from high-velocity mist that the person got on him and would have to be within four feet of the shots when they were fired," says Englert.

"The shooter had to be facing her left side," says Englert, who believes Kim's hand could have splattered her own blood as she fell to the floor. "Because the shot is through the left side of her head, it exits out the right and then what happens when you're shot through the brain? You're bleeding, you're dropping blood and it's hitting the concrete, and as you go down, you strike that."

This was enough to convince Frank Renn of his son-in-law's guilt. "It's going to be proven it was on his shirt. And that told me right then that David did it. There's no more doubt in my mind that David did it."

But David's family still has a lot of doubt.

"Blood spatter is not an exact science, and their expert admitted two experts can disagree," says David's sister, Julie Camm. "You have a 50/50 chance of having the right answer. That's reasonable doubt."

Defense attorney McDaniel has his own expert, who claims those tiny dots were transferred onto Camm's shirt while he was moving around the bloody crime scene, after his family was murdered.

"He's given his conclusions that there isn't any high-velocity blood spatter on the front of David's T-shirt," says McDaniel. "There isn't any impact on his shoes or socks."

Now, the jurors have to decide what to believe - eight spots of blood that prove David Camm did it or the 11 witnesses who say he couldn't have committed the crime.

Three days after they began deliberating, the jury reaches a verdict: guilty. David Camm is now a convicted murderer, sentenced to 195 years in prison without parole.

"They painted this small portion of a picture of my brother and they got a conviction based on that," says David's sister, Julie.

"You just sent an innocent man to jail," screams David's brother, Donnie, at the jury outside the courthouse. "There's a predator loose and it's your fault, all 12 or 15 of you!"

Juror Judy Price says the deliberations were "the most gut-wrenching experience I have ever experienced in my entire life."

When deliberations started, jurors say, the vote was 8 to 4 in favor of convicting Camm. In just a few hours, it was 10 to 2.

That's where things got stuck – and ugly. Some jurors say they were crying, others were yelling.

"I wanted so bad to find him not guilty," says Price, one of the last holdouts.

The biggest obstacle to a guilty verdict was the testimony of the basketball players, says juror Ruth Caruso. "But when when you start breaking down to each person's testimony, it's all different. They each said different things."

But in the end, the jurors came to believe Camm had the opportunity - and a motive.

"He might have been molesting his little girl," says Caruso.

Even though Camm was never charged with molesting Jill, that allegation weighed heavily on jurors' minds.

But Price was still troubled by the evidence the other jurors found compelling - those eight tiny drops of blood. She was troubled by the blood spatter until another juror whom she had come to trust, won her over with an impassioned argument.

During the two years since the guilty verdict, Camm has been doing time while his family has been battling to prove his innocence. "We're not gonna quit on him," says Lockhart. "We know he didn't do it."

In August, there was a development that could only be described as stunning. An Indiana appeals court threw out the convictions, and in the process, sent this case back to the beginning. The court blasted the judge for improperly admitting evidence of adultery, ruling that evidence could have unfairly persuaded the jury that Camm had a motive for killing his family.

Prison, however, has taken its toll on David Camm, who is still not a free man. There's a new prosecutor, Keith Henderson, who says he'll try him again, and this time, he has stronger evidence that Camm abused his daughter, Jill.

But Camm's new lawyer, Katharine Liell, says there's no proof that Camm molested his daughter. She says she'll fight to keep those charges out of the new trial. She also says that the real killer can be identified through DNA that was left at the scene on Bradley's sweat pants but never fully investigated.

"Kim struggled with a killer or killers," says Liell. "We know Dave Camm did not commit those murders."

A second trial will be a replay of one of the worst days in the lives of two families. At least Camm's family will get another chance, but Kim's family has to relive the murders with nothing to gain, no matter what the verdict.

"I see my daughter getting killed, and those two little kids. I just can't imagine what went through their last minutes of their lives," says Kim's father, Frank Renn.

"And I don't know of anybody who should have to go through this thing twice. Once is bad enough, but doing it twice? I don't know. It'll be hard. You never get over this."

Return to Part 1: Disturbing the Peace