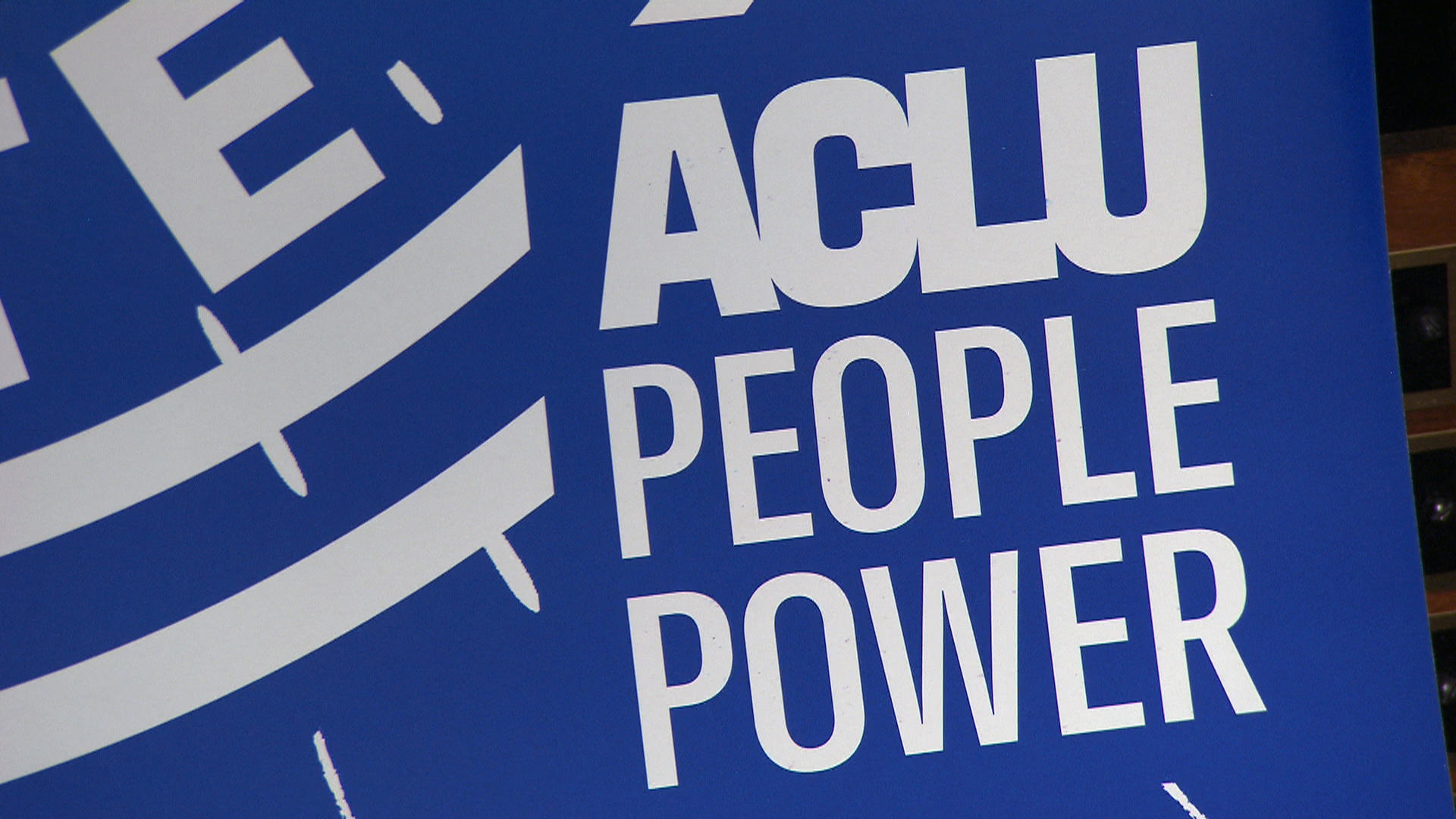 The American Civil Liberties Union, the ACLU, has been a thorn in the side of government for the nearly 100 years since it was created. With its unflinching devotion to the Bill of Rights, it has angered just about everyone by representing violent criminals, communists and famously, in Skokie, Illinois, neo-Nazis. Always insisting that if rights don't apply to everyone, they apply to no one. ACLU lawsuits and friend of the court briefs have won huge expansions of rights in this country. Miranda warnings from police, access to contraception, internet privacy, interracial and same-sex marriage. And yet the ACLU has always been something of a pariah, being called a "card-carrying member" suggests being to the left of the left. But in the Trump era, that thorn in the side of power has found new power. And you'll be surprised at the direction it's taking.

January 28, 2017. Donald Trump had been president for a week and a day when the ACLU scored its first legal victory against him.

They won a temporary injunction against the president's order banning travelers from seven majority Muslim countries the night after he signed it. ACLU executive director Anthony Romero looked a bit stunned by the crowd.

Anthony Romero: I've come out of many courthouses. I have never come out of a courthouse where there were 3,000 people who spontaneously amassed.

ROMERO AT COURTHOUSE: So we want to thank you very very much. [CHEERING]

Lesley Stahl: Am I correct that soon thereafter you started to see bumps in your membership?

Anthony Romero: There were almost 400,000 new members just on that one weekend after the Muslim ban.

President Donald Trump: We are also taking strong measures to protect our nation.

At President Trump's first address to Congress, some senators and congressmen wore blue ACLU ribbons that also turned up on Hollywood red carpets.

Anthony Romero: That was new.

Lesley Stahl: That was definitely new.

David Cole: What we saw after President Trump was elected was the most energized citizenry around civil liberties and civil rights that I have ever seen.

David Cole: We had all these people coming to us, newly joining the ACLU and wanting to engage. Not wanting just to write a check or push a button. But wanting to actually take action in defense of liberty.

Lesley Stahl: You owe it all to Donald Trump.

David Cole: Exactly. He has reminded people of the importance of standing up and defending liberty.

Lesley Stahl: How much?

Anthony Romero: Over $120 million in the first year.

Lesley Stahl: What? $120 million in the first year after Trump was elected?

That was 25 times the previous year's number.

Lesley Stahl: Did you think that was gonna happen?

And they've put that money to work, hiring more staff and filing lawsuit after lawsuit against the administration -- 115 of them so far.

Lesley Stahl: Are you busier than you've ever been against an administration?

David Cole: I think without question.

But the ACLU did more than file lawsuits. It set out to turn all those people wanting to take action. Into a grassroots civil liberties army called "People Power," modeled after a group that might seem an unlikely source of inspiration for the ACLU: the NRA, the National Rifle Association.

Lesley Stahl: You're looking to the NRA (LAUGH) for guidance?

Lesley Stahl: Come on. The ACLU and the NRA?

Anthony Romero: We're very different. We believe in the-

Anthony Romero: --the regulation of firearms. They focus on one amendment. I've got the rest of them. But there's a lot we can learn from them.

As ACLU political director, Faiz Shakir has been in charge of implementing some of the NRA's lessons.

Lesley Stahl: What is it in their model that you like?

Faiz Shakir: They're building civic society around their issue. You go to gun clubs and gun shows even PTA meetings and church meetings with your fellow activists. And I think that is inspirational in some regards for us, to think about mobilizing your issues as a-- as a lifestyle.

And as the deciding factor at the ballot box. Just as the NRA built a bloc of gun rights voters - the ACLU wants a bloc of civil rights and civil liberties voters. Their slogan: "Vote like your rights depend on it." But they're not taking everything from the NRA playbook.

That's because the ACLU has a strict and long-standing policy of non-partisanship: never supporting a political party, and never endorsing or opposing any candidate for elective office. The idea is to remain free to challenge anyone in government whose actions violate civil liberties.

So as the ACLU dove into the fall midterm elections with more funds and fight than ever.

As usual, it campaigned for ballot initiatives in several states to expand voting rights, a longtime ACLU goal.

But Shakir's team also got involved in two governor's races, leading to complaints they violated their own policies.

In Kansas, then-secretary of state Kris Kobach, a President Trump ally who the ACLU had sued several times alleging voter suppression, was in a tight 5-way race for governor.

Announcer: Kris Kobach took an oath to uphold the constitution, and then, as secretary of state, he was held in contempt of court for refusing…

ACLU ad continues: ...threatening children with disabilities. Regardless of who you vote for on November 6th, we the people must demand that politicians respect the rule of law. The ACLU does not endorse or oppose candidates.

Lesley Stahl: Here's what I smile at.

Lesley Stahl: You have that ad. You tell the voters of Kansas all the things that you strongly disagree with about him. And then at the bottom it says, "We don't endorse candidates."

Faiz Shakir: Yes, that's right. We are also advertising to people that we are a nonpartisan organization, that we don't endorse and oppose candidates. So when you watch an issue--

Lesley Stahl: It's like a wink thing. Ha, ha, we don't endorse--

Faiz Shakir: I don't think it is a wink thing.

Mom: It was the most horrific day of my life.  My son was addicted to drugs...

ACLU ad continues: And Stacey Abrams will end dependence on private prisons, saving millions that could instead be used for treatment.

Mom: We were so destroyed as a family.

Announcer: ACLU does not endorse or oppose candidates.

Ira Glasser spent 34 years at the ACLU -- 23 of them as executive director. He believes the ACLU's involvement in candidate races has crossed the line into partisanship, and he's concerned enough about it to speak out.

Ira Glasser: I think it's strategically weakening its mission. The best strategy of protecting civil liberties is not to be partisan.

Lesley Stahl: The current leadership of the ACLU would say what they're really doing is just telling you where Stacey Abrams stands on issues and where her opponent--

Ira Glasser: No, but that's not what they're doing.  There's nobody could look at that ad and not think it was a campaign ad for Stacey Abrams. It was. Look, we are living in a time now where Trump has made it a cultural habit to say-- to do something and then, while you're doing it, deny that you're doing it. So the fact that they deny it is just dissembling, it's just-- it's just, you know-- dishonest.

Lesley Stahl: Ira Glasser says that this is a key principle of the ACLU not to get involved with candidates. He thinks you crossed a line.

David Cole: He's welcome to his views and we'll defend his right to have his views. Look, the people who get elected have tremendous power to decide whether the government is going to respect civil liberties or violate civil liberties. And so why would you not ask the citizenry to think about that issue when they are choosing who they want in office?

Anthony Romero: It would be almost malpractice if in this moment we said, "Oh, we're not gonna engage the political process because we're afraid of being called partisan." When our issues are at play, like immigrants' rights, and voting rights, and reproductive rights, and LGBT rights, we have an affirmative obligation to step up.

But Glasser says they're stepping up too much, putting progressive politics ahead of traditional civil liberties concerns -- like the presumption of innocence.

Case in point: the ACLU's decision to oppose Brett Kavanaugh's Supreme Court nomination based on Christine Blasey Ford's allegation of sexual assault and Kavanaugh's response. The ACLU bussed and flew in large numbers of women to Capitol Hill to lobby key senators and ran an ad in four states, insinuating Kavanaugh's guilt by association.

Announcer: We've seen this before, denials from powerful men.

Bill Clinton: I did not have sexual relations with that woman.

Brett Kavanaugh: I categorically and unequivocally deny the allegation against me by Dr. Ford.

Announcer: America is watching. Oppose the confirmation of Judge Kavanaugh.

Lesley Stahl: This wasn't a criminal trial, it wasn't even a civil trial. It was a job interview.

Ira Glasser: I agree with the fact that it was a job interview and not a criminal trial but we're talking about the ACLU taking out a million dollars' worth of ads arguing that an accusation was the equivalent of a finding of guilt. For the ACLU, of all organizations, to be complicit in-- in the national pastime now of converting accusations into convictions without a trial-- [MAKES FACE]

Lesley Stahl: Ira Glasser, who had your job for many years.

Lesley Stahl: He has said that the changes that have come about recently under your leadership are shortsighted and may undermine the credibility of this organization.

On election night in November, all the voting rights measures the ACLU fought for passed. And in Kansas, Kris Kobach was defeated. But victory didn't silence the criticism.

Three ACLU state affiliates have gone on record opposing what one called the "abandonment of non-partisanship," and "turning the ACLU into an advocacy organization."

Lesley Stahl: Do you see yourself now as a critic of the ACLU?

Ira Glasser: No, I see myself as a critic of some of what the ACLU is doing. The ACLU probably still does more good work on issues I care about than any organization in America. But I think they are undermining the sacred importance of their primary mission, and there's nobody else to do it.