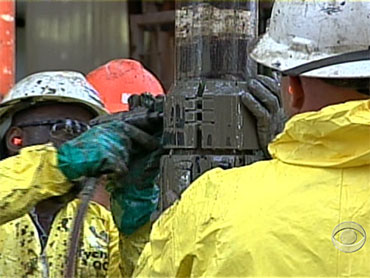 The plea deal allows Thatcher, the son of former British Prime Minister Margaret Thatcher, to leave South Africa and to rejoin his family in the United States, although CBS News Correspondent Steve Holt reports Thatcher still could do time if he doesn't pay up.

Mark Thatcher admitted in the Cape High Court that he paid to charter a helicopter, which mercenaries planned to use in their attempted takeover. But he maintains he believed it was to be used for humanitarian purposes, according to his lawyers and a person close to the family.

Only later did he begin to suspect the helicopter would be used for military purposes, according to a statement issued by George van Niekerk, a member of his legal team.

"Although the helicopter was never used in any such mercenary activity, and in fact did not leave southern Africa, Sir Mark had by then committed an attempt to contravene the provisions of" South Africa's anti-mercenary laws, van Niekerk said.

Judge Abe Motala ordered Thatcher to pay the fine as part of the plea deal — but if he does not pay by Jan. 17, he faces a five-year prison sentence with a further four years suspended for five years.

"I am willing to pay any price to be reunited with my family," Thatcher told journalists outside court. "I'm sure all of you who are all husbands and fathers would agree with that."

Thatcher's wife, Diane, the daughter of a wealthy Texas auto dealer, flew to Dallas with their two children shortly after his August arrest.

Mark Thatcher refused to answer questions before he was whisked home in a green BMW. Across the street, a poster reading "Save me mummy" hung from a window.

A spokesman for Lady Thatcher's office in London said late Wednesday: "She is very relieved that matters have now been settled and that the worry of these last few months is now over."

Mark Thatcher, who has lived in South Africa since 1995, was arrested at his suburban Cape Town home on Aug. 25 and charged with violating this country's Regulation of Foreign Military Assistance Act.

He also faces charges in Equatorial Guinea, where 19 other defendants are already on trial in connection with an alleged plot last year to overthrow President Teodoro Obiang Nguema, who has ruled Africa's third-largest oil producer for the past 25 years.

Three others later pleaded guilty to violating South Africa's Foreign Military Assistance Act as part of a plea bargain under which they agreed to give evidence against other alleged coup participants.

"It should be noted that Sir Mark was not charged with any involvement in the attempted coup d'etat in Equatorial Guinea," van Niekerk said. "The plea bargain was entered into solely as a result of his financing of the charter of a helicopter in circumstances where he should have exercised more caution."

The court ordered Thatcher to answer questions submitted by Equatorial Guinea under oath in November, but that appearance was postponed until Feb. 18 to give his lawyers a chance to appeal.

Thatcher's legal team has not indicated whether it will proceed with an appeal.

"In our view, the sentence is a just and fair one in the circumstances," Sipho Ngwema, spokesman for the National Prosecuting Authority, said in a statement.

In the United States, where he married in 1987, Thatcher settled a civil racketeering lawsuit for an undisclosed sum and faced charges from the Internal Revenue Service stemming from a role with a home security company that went bankrupt.

He was scrutinized by Britain's Parliament in 1994 over reports that he was involved in arms sales to Saudi Arabia and Iraq while his mother was prime minister — allegations he denied.