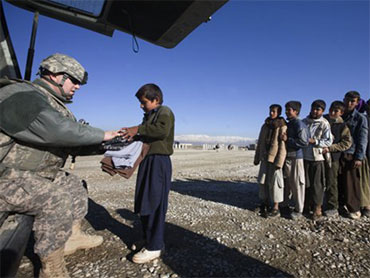 Thanksgiving Day for soldiers in this valley ringed by towering snowy peaks began with a 6-mile slog to aid village schools without desks and windows, and ended with five, once scrawny local turkeys soldiers have been fattening up for the past month.

"Just another day, another mission," several soldiers said as a 25-man patrol from Able Troop, 3-71 Cavalry Squadron set out on a cold morning under brilliantly blue skies.

Others let sentiment seep through their matter-of-fact, stoic shells.

"We're with our family just like we would be at Thanksgiving back home," said Staff Sgt. Ben McKinnon, of New Haven, Connecticut, nodding toward the soldiers around him that have daily shared hardship, suffering and some elation over the past year.

Commander Capt. Paul Shepard said his unit, part of the 10th Mountain Division, had a great deal to be thankful for: the squadron has suffered two soldiers killed in action and a number of wounded but none have died in Alpha Troop.

"Knock on wood we've had some really good luck in our district, We've had a relatively good welcome from the locals and the severity of contact with the insurgents has not been great," Shepard, of Black River, New York, said. "And we have tried to give out as much as we can."

Troops in Baraki-Barak, located in Logar province, just south of Kabul, have blitzed the area with humanitarian aid under an innovative "extreme make-over" concept that has had Gen. Stanley A. McChrystal, the top U.S. commander in Afghanistan, and civilian officials, helicoptering in to see how the model could be applied elsewhere in the country.

Thursday's patrol, which visited a boy's elementary school high in the hills and a girl's high school near the base, was part of an effort to equip the district's ramshackle classrooms with the most basic necessities.

In the spirit of Thanksgiving, it was not just American soldiers who came to the table: Afghan and NATO forces also joined in the feast, reports CBS News correspondent Mandy Clark.

To enjoy the fresh thing, soldiers a month ago bought six turkeys at $20 apiece from local farmers, built a special pen under one of the guard towers, and fed them cornbread, crackers, and even chicken. One was slaughtered earlier to see how the birds were coming along and declared to be "awesome."

The unit's mechanics converted a 55-gallon drum into a smoker and Staff Sgt. Charles Hough, of Dexter, New York, who is otherwise charged with the unit's mortars, volunteered to supervise deep frying three of the celebratory birds, something he learned from his brother.

For several days, the troop's nightly operations meetings devoted about as much time to Thanksgiving preparations as targeting the Taliban.

"I think the army goes out of its way to make the holiday as good as possible," Shepard said. "I would like to think that none of the soldiers will miss two Thanksgivings or Christmases in a row, but unfortunately that may happen in these days of frequent overseas deployments."

Most soldiers here won't be getting back to their home base of Fort Drum, New York, until after Christmas.

Spc. Seth Breesawitz, of Springfield, Missouri, who supervises two other army cooks on the outpost, said that to feed some 150 soldiers the local turkeys were supplemented by pre-baked and seasoned ones airlifted from the United States to the massive U.S. base in Bagram, and then trucked to Baraki-Barak via the main military camp in Logar.

Thursday evening, just as the sun set and a bitter cold set in, the soldiers sat down to the traditional turkey plus ham basted in brown sugar and honey, sweet potatoes topped with marshmallows, five varieties of pies and nonalcoholic beer. A much-scaled down version of the feast was helicoptered to a handful of soldiers in an observation post perched on a 6,900-foot spur.

"It makes me feel good to give them a piece of home," said Breesawitz as cooks finished slaughtering the turkeys Wednesday evening, preparing to pluck their feathers with the help of four, young and enthusiastic Afghan boys who perform odd jobs around a base where the troops have lived for almost a year.

All in all, it's hardly a place most would want to call home.

The soldiers live in tents or crude wooden huts, ringed by a 12-foot earthen defensive wall topped by barbed wire. The "dining hall" is a square wooden structure with bare walls but for paper cutouts of two turkey heads and a sprinkling of maple leaves. The kitchen, a tiny tent on a trailer, would drive finicky chefs to suicide.

Around the outpost lie barren fields and stark, fortress-like village compounds fashioned from mud brick. The landscape exudes a melancholy air: autumn's last leaves cling to apple trees, and the naked branches of willows are etched into a cold sky. In the distance, mountain peaks soar to 14,000 feet, capped by early winter snows.