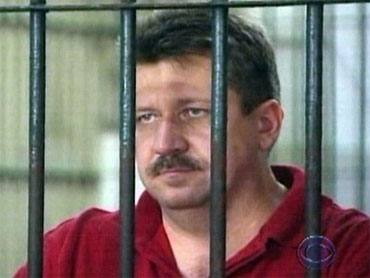 The suspected Russian arms dealer known as "The Merchant of Death" is tired of prison life but optimistic a Thai appeals court will rule in his favor Friday and refuse to extradite him to the United States, his lawyer said.

Viktor Bout, a 44-year-old former Soviet air force officer, is reputed to be one of the world's most prolific arms dealers. He has been linked to some of modern history's most notorious conflicts, allegedly supplying weapons that fueled civil wars in South America, the Middle East and Africa to clients such as former Liberian dictator Charles Taylor and Libyan leader Moammar Gadhafi.

Bout's high-profile arrest in a 2008 U.S. sting operation in Bangkok ended nearly a quarter century of cat-and-mouse chases for the elusive Russian. It also raised Washington's hopes for a quick handover of a man who has never been prosecuted despite being the subject of U.N. sanctions, a Belgian money-laundering indictment and a travel ban.

New Charges for "Merchant of Death"

Instead, it spurred a diplomatic tug-of-war between Moscow and Washington that led to lengthy delays and prompted a lower court judge to seek input from the Foreign Ministry, saying he was in "a tough position" and feared ties with both countries could be at stake. The Bangkok Criminal Court ultimately rejected the U.S. extradition request in August 2009.

Experts say Bout - who gained notoriety in the 1990s for running a fleet of aging Soviet-era cargo planes to conflict-ridden hotspots in Africa - has been useful for Russia's intelligence apparatus, and Moscow does not want him going on trial in the United States.

Ahead of Friday's verdict, Bout's lawyer said his client was "feeling very well."

"He's having a very bad toothache. But in general, he's very optimistic," said Lak Nittiwattanawichan. "I've had many clients who were in similar positions and they'd be very nervous, but Viktor can sleep at night."

Bout has repeatedly denied the accusations and claims his air cargo business was legitimate.

"He's very disturbed that people have been misrepresenting him. He is particularly concerned that all of these movies and books paint a bad picture of him," the lawyer added. "Viktor is an entrepreneur, a businessman. He's good at what he does."

The 2005 Nicolas Cage film, "The Lord of War," is widely believed to be modeled after Bout's life.

The Russian's own nickname was coined in 2000 when a high-ranking minister at Britain's Foreign Office dubbed him "The Merchant of Death" for his alleged arms role in Africa.

Bout's March 2008 arrest at a Bangkok luxury hotel came after an elaborate operation led by U.S. agents posing as arms buyers for the Revolutionary Armed Forces of Colombia, or FARC, which Washington classifies as a terrorist organization. The four-month investigation involved meetings in Curacao, Denmark and Romania.

After his arrest, Bout was indicted in the U.S. on charges of conspiring to sell millions of dollars worth of weapons to FARC, including more than 700 surface-to-air missiles, thousands of guns, high-tech helicopters and airplanes outfitted with grenade launchers and missiles.

The lower Thai court said it rejected the U.S. extradition request because Thailand considers the FARC a political movement and not a terrorist group, and that extradition could not be granted for a political offense.

The new charges say Bout and his former business associate, Richard Chichakli, used a series of front companies to purchase two planes from U.S. companies in 2007, in violation of U.S. and United Nations sanctions. At the time, U.S. officials intervened to block the sale.

"We continue to believe that Viktor Bout should be extradited to the United States to stand trial," said Kristin Kneedler, a spokeswoman for the U.S. Embassy in Bangkok, which was waiting for Friday's verdict to discuss the case in greater detail.

Russia, for its part, made great efforts to get Bout out of Thailand - and when that failed tried to make his stay more comfortable.

"The Russian authorities told me that they worried about the length of time Viktor has been jailed," Bout's lawyer said. "They requested that he be taken to live in the Russian Embassy, guaranteeing that he would not leave Thailand. But the court wouldn't let Viktor out."

Both Washington and Moscow have accused the other of trying to win Bout's release by bribing Thai officials - a common practice in a country where the judiciary is notoriously corrupt. Russia, which sold cheap oil to Thailand after Bout's arrest and has talked of selling it fighter jets, summoned the Thai ambassador in Moscow at one point and the country's foreign ministry demanded the case be investigated "objectively and impartially."