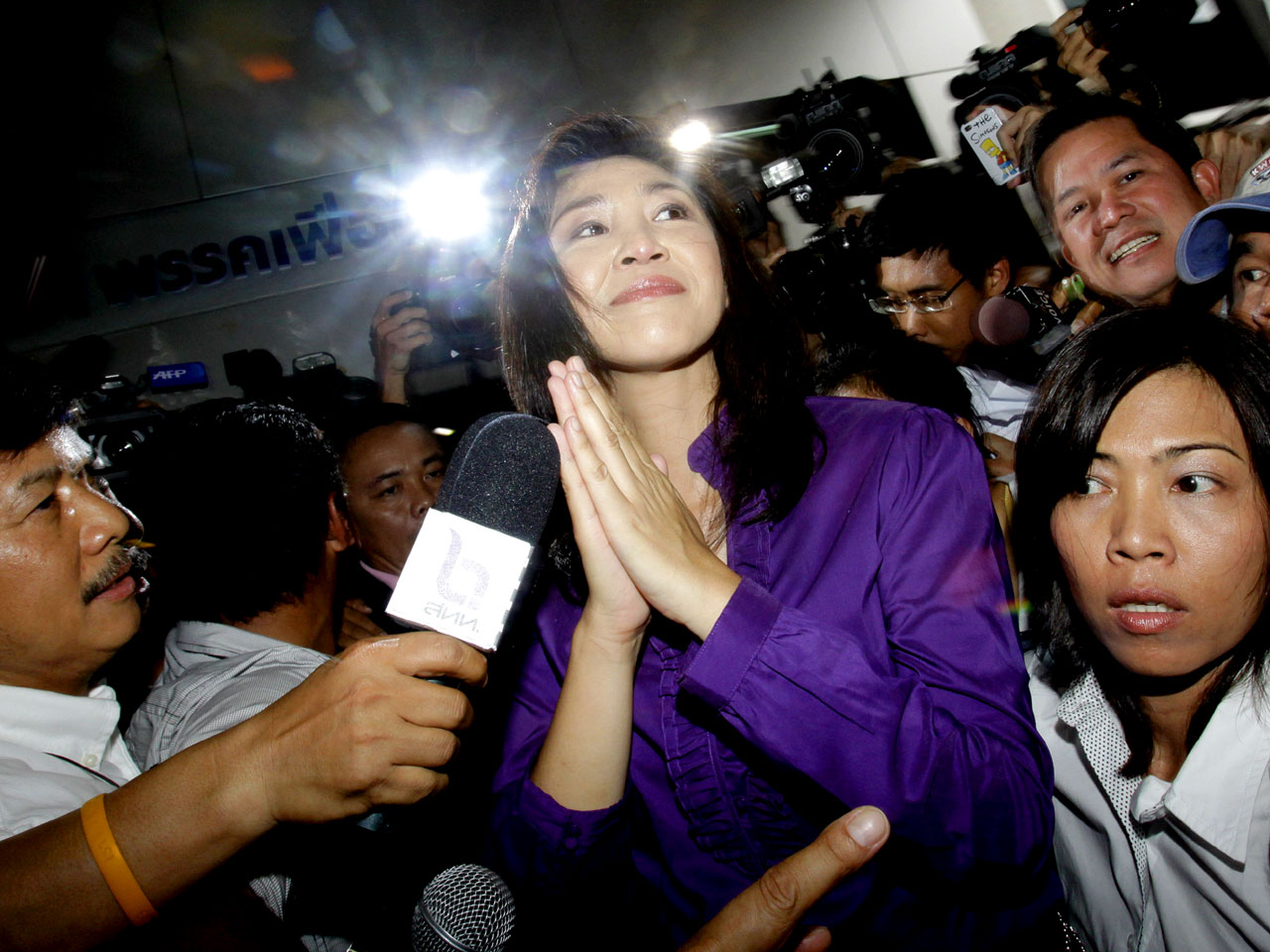 BANGKOK - The sister of Thailand's fugitive former prime minister led his loyalists to a landslide election victory Sunday, a stunning rout of the military-backed government that last year crushed protests by his supporters with a bloody crackdown that left the capital in flames.

The results pave the way for Thaksin Shinawatra's youngest sister, widely considered his proxy, to become the nation's first female prime minister - if the coup-prone Thai army accepts the results.

The Southeast Asian kingdom has been wracked by upheaval since 2006, when Thaksin was toppled in a military coup amid accusations of corruption and a rising popularity that some saw as a threat to the nation's much-revered monarchy.

The coup touched off a schism between the country's haves and long-silent have-nots - pitting the marginalized rural poor who hailed Thaksin's populism against an elite establishment bent on defending the status quo that sees him as a corrupt autocrat. Last year's violent demonstrations by "Red Shirt" protesters - most of them Thaksin backers - and the subsequent crackdown marked the boiling over of those divisions.

On Sunday, though, they played out at the ballot box in a vote that will decide the shape of Thailand's fragile democracy.

The Pheu Thai party was led to an overwhelming victory by Thaksin's 44-year-old sister, Yingluck Shinawatra, a U.S.-educated businesswoman hand-picked by her billionaire brother.

He has called her his "clone." The party's slogan is: "Thaksin Thinks, Pheu Thai Acts."

From exile 3,000 miles (4,800 kilometers) away in the desert emirate of Dubai, Thaksin hailed the outcome. "People are tired of a standstill," he said in an interview broadcast on Thai television. "They want to see change in a peaceful manner."

At her party headquarters across town, Yingluck told an electrified crowd of supporters: "I don't want to say that Pheu Thai wins today. It's a victory of the people."

With 98 percent of the vote counted, preliminary results from the Election Commission showed Thaksin's Pheu Thai party far ahead with 264 of 500 parliament seats, well over the majority needed to form a government. The Democrat party of army-backed incumbent Prime Minister Abhisit Vejjajiva had 160 seats.

Thaksin and his proxies have won the country's last four elections. By contrast, the Democrat party - backed by big business, the military and circles around the royal palace - has not won a popular vote since 1992.

Though he has been widely criticized for abuse of power and decried for a streak of authoritarian rule that has profoundly polarized Thailand, Thaksin has nevertheless "become a symbol of democracy for his supporters," said Siripan Nogsuan Sawasdee, a political science professor at Bangkok's Chulalongkorn University.

Thailand's democratic process has been repeatedly thwarted over the years, with 18 successful or attempted military coups since the 1930s.

Thaksin was barred from politics in 2007 and convicted on graft charges the next year. His overthrow was followed by controversial court rulings which removed two of the pro-Thaksin premiers who came after - one of whom won a 2007 vote intended to restore democracy in the nation of 66 million people.

Events were spurred on by enraged anti-Thaksin "Yellow Shirt" demonstrators, who overran the prime minister's office and shut down both of Bangkok's international airports in 2008, stranding hundreds of thousands of travelers.

After Abhisit was propelled into power by the military-backed maneuverings that followed, pro-Thaksin "Red Shirts," composed largely of the rural poor, took to the streets in protest.

They overran a regional summit in 2009 that saw heads of state evacuated by helicopter off a hotel rooftop.

Last year, Red Shirt protesters poured into Bangkok by the tens of thousands from the countryside, paralyzing the city's wealthiest district for two months. By the time they were crushed by an army crackdown, the capital's glittering skyline was in flames. Some 90 people were killed and around 1,800 were wounded, mostly protesters.

"The future depends on whether the traditional elite will be willing to accept the voice of the people," Pavin Chachavalpongpun of the Institute of Southeast Asian Studies in Singapore, told The Associated Press.

The more Yingluck's party wins by, he said, "the more stable her government will be, the more difficult it will be for the elite to do anything against it."

In Dubai, Thaksin smiled when asked whether the results would be respected and said he was optimistic justice would prevail. "In Thailand, things are changing," he said. "I don't think a coup d'etat will happen again soon."

Abhisit and his allies have accused Yingluck of plotting Thaksin's return to Thailand through a proposed amnesty for all political crimes committed since 2006. But speaking to reporters Sunday, Thaksin insisted, "I'm not in a hurry to go back."