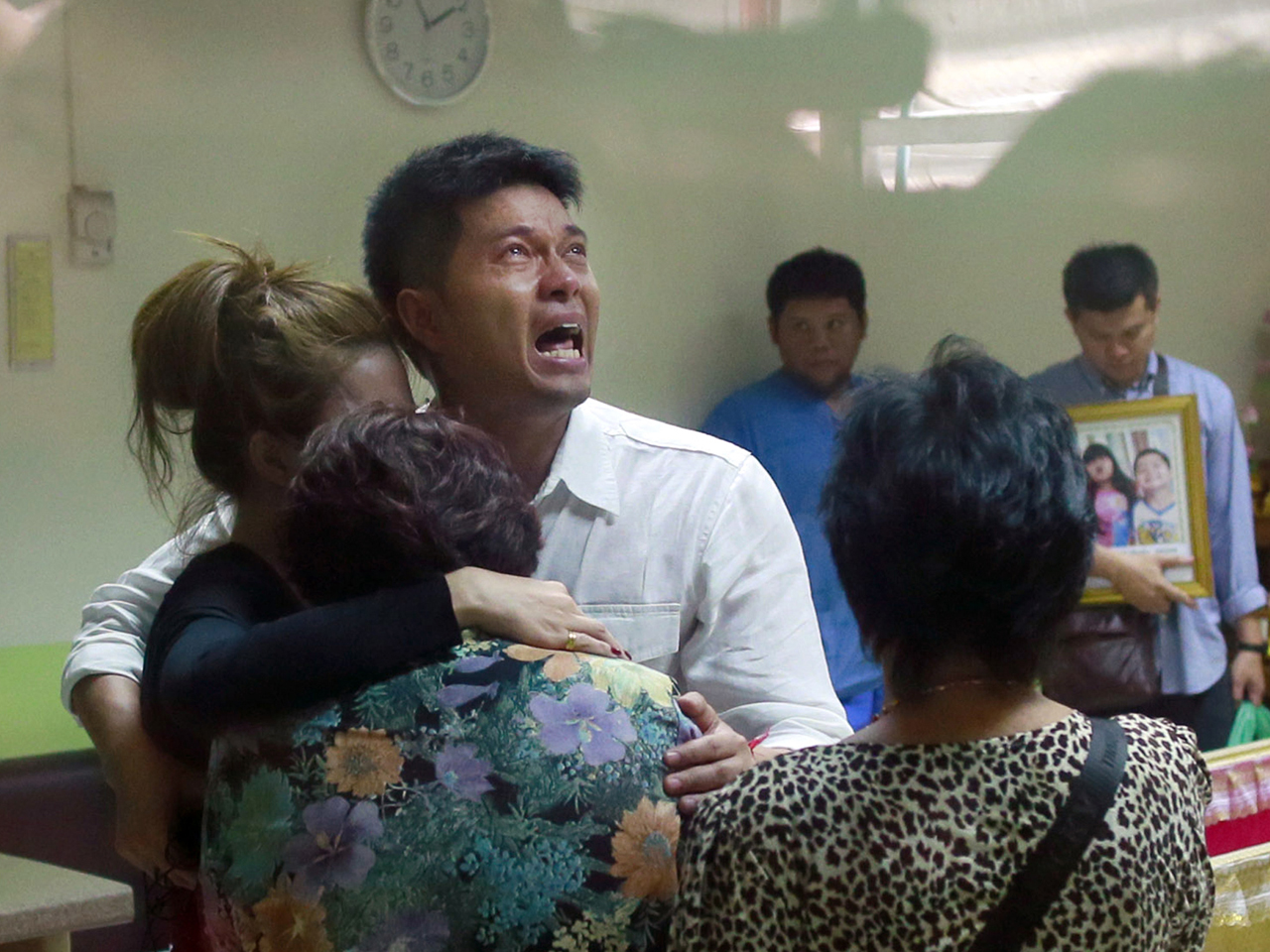 BANGKOK -- The father grimaced and wept as he struggled to contain his grief at the death of his two children in a grenade attack during a weekend trip to a mall in downtown Bangkok - the latest casualties in Thailand's months of political crisis.

"I'm asking and pleading to every side to let my children be the last case (of violence) on Thai soil," Tayakorn Yos-ubon, 33, said, his voice shaking, before retrieving their bodies from the morgue Monday.

Korawit, 4, and his sister Patcharakorn, 6, were not part of the anti-government demonstrations. They had piled into a three-wheeled "tuk-tuk" taxi after eating at a KFC with their cousin and an aunt when the attack occurred Sunday near a busy intersection occupied by the protesters.

The siblings, along with a 5-year-old girl who died Saturday in another attack on a rally site in the eastern province of Trat, are the first children to be killed in the country's recent political unrest, which has claimed at least 20 lives and injured more than 700 since November. Police have not arrested any suspects in the weekend attacks.

The Thai public has recoiled in shock over the children's deaths, and yet there seems to be no sign that either side in the impasse is softening its position. City residents have braced for more violence.

"We don't know who did it but it shouldn't have happened to children, my children," Tayakorn said.

"I didn't expect my kids to be brilliant. I just wanted them to be good people and to be able to get by in this society," he added. "But this society, right now, is very cruel. Very, very cruel."

The 9-year-old cousin suffered brain and lung damage and is in intensive care.

UNICEF on Monday called for the protest zones to be made "child-free" and urged parents to keep their children away.

UNICEF "condemns the violence that resulted in these tragic and senseless deaths and injuries to children," it said in a statement.

The violence continued Monday night as a grenade was fired from an M79 launcher, apparently at the headquarters of the opposition Democrat Party, which is closely allied with the militant anti-government protest movement. Explosive ordnance disposal police Col. Kamthorn Auicharoen said there were no injuries but a car was damaged.

A police officer who was shot in the head during a clash with anti-government protesters last week also died Monday.

The protesters, mostly representing the urban elite and those in the south, are pressing for the resignation of Prime Minister Yingluck Shinawatra. They want her to be replaced by an appointed interim government to implement reforms they say are needed to fight corruption and permanently remove Yingluck's wealthy family from politics.

Thailand has seen sometimes-violent political conflict since 2006, when then-Prime Minister Thaksin Shinawatra, Yingluck's brother, was ousted by a military coup after being accused of corruption and abuse of power. Thaksin's supporters and opponents have since taken to the streets for extended periods in an ongoing power struggle.

Yingluck, who has strong backing from the rural poor majority, condemned the weekend attacks and said the country would suffer more pain if the two sides don't negotiate.

"It's time we make an effort to talk together, and each side must stop turning away from the other," she said, adding that she has a duty to remain in her job until a new government is chosen.

The protesters have refused to negotiate.

The country's army commander-in-chief also urged a negotiated solution to the standoff, saying the military would not intervene despite the violence.

"What needs to be done urgently is for each side to talk and discuss, to make sure they will receive fairness and move toward a solution methodically and peacefully," Gen. Prayuth Chan-ocha said.

In 2010, pro-Thaksin "Red Shirts" occupied part of Bangkok for two months and were assisted by their own armed militia. More than 90 people were killed in violent confrontations, with the army finally sweeping away the demonstrators.