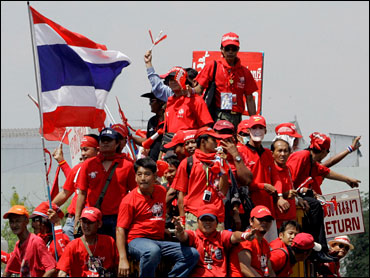 More than 20,000 red-shirted protesters ringed the prime minister's office Thursday, demanding the government resign and scoffing at its handout of checks to millions of low-income workers as a buy off.

The demonstration began shortly after the government of Prime Minister Abhisit Vejjajiva began doling out 2,000 baht ($55) checks to millions of Thais to stimulate an economy battered by the global financial crisis.

The demonstrators, followers of ousted Prime Minister Thaksin Shinawatra, say Abhisit's government came to power through illegal means and are demanding a dissolution of Parliament and elections.

"Is he (Abhisit) trying to buy us off?" said a protest leader, Nattawut Sai-kua. "It is not going to work. We will protest until this illegitimate government is gone."

The "red-shirts," as they are commonly known because of their favored color, said they planned to demonstrate at Government House for at least three days but have promised not to enter the compound. Their earlier protests have been generally peaceful.

About 10,000 police and soldiers were deployed for the protest, said Metropolitan Police Commander Lt. Gen. Worapong Chiwpreecha, who estimated the number of demonstrators at more than 20,000.

"What we intend to do is get the economy through this very difficult period," Abhisit said after handing out the first check to a teacher at the launch of the 18 billion baht ($509 million) program. "We need to get money quickly into the system and this is the quickest way."

Thailand has been hit with its worst economic downturn since the 1997 Asian financial crisis. Southeast Asia's second largest economy grew 2.6 percent in 2008. But it is expected to contract 2.5 percent this year, as the country's crucial export sector has slid four months straight.

Stores and shopping complexes were quick to jump in, hoping to attract check recipients with special deals.

"The check is valued 20 percent higher if you cash it in at our store," said Chamnan Metapreechakul, senior marketing director for the Mall Group, one of Thailand's largest mall operators. "We expect people to spend it because it's not large enough to save."

Chamnan said the stores have created baskets of products worth 2,200 baht ($61) for those who do not want to think too much about how to spend their windfall.

At the Kentucky Fried Chicken fast food chain, a check can be exchanged for store coupons with 20 pieces of chicken thrown in for free.

"It feels good that I am spending to save the country. What an odd concept!" said Narisara Songsawang, a 36-year-old clerk.

The first lot of 5.5 million checks issued Thursday will be followed by 1.2 million in late March and the rest in early April.

Some said they planned to save the money for hard times.

"You watch the news and people are getting laid off daily. I think I will save it in case my husband is the next one to lose his job," said Ponnapa Sintanee, a 38-year-old mother of three. She earns 12,000 baht ($340) a month as a school teacher.

Although the one-time measure was welcomed by many, some criticized it for targeting only about a third of the country's labor force who are registered with the Social Security Fund. Those in the informal sector, including farmers and self-employed people, are not eligible.

Abhisit said the government plans to launch other programs for those left out of the current scheme.

When he became prime minister in December, Abhisit said his government would retain populist policies - including cheap credit and health care - implemented under Thaksin, who has continued to loom over Thai politics even after his ouster by a military coup in 2006 for alleged corruption and abuse of power.

But the demonstrators rejected Abhisit's handout, stressing that the previous pro-Thaksin government was removed by a court action backed by the powerful military.

Thailand was destabilized last year by months of protests by both supporters and opponents of Thaksin. He remains popular among the country's rural majority.