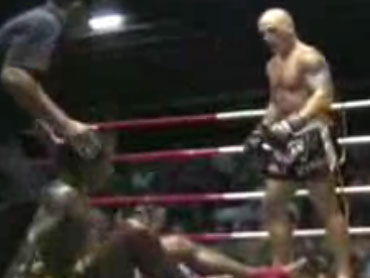 An American tourist was killed on the Thai island of Phuket after a British man allegedly picked a fight with him at a bar, followed him back to his hotel and stabbed him to death, police said Sunday.

The body of Dashawn Longfellow, 23, was found before dawn Saturday at the Yanui Paradise Resort with several stab wounds in his chest, said police Lt. Col. Anukul Nuket.

According to witnesses, Longfellow was at a bar near his hotel with a Thai girlfriend when a British man identified as a regular picked a fight with him, Anukul said.

The Briton, identified by The Guardian as Lee Aldhouse, 28, who trained in Thai kickboxing, or Muay Thai, was known for "getting drunk and picking fights and bragging that he's invincible," Anukul told The Associated Press in a telephone interview. Longfellow fended off the attacker until bar staff separated them and the American left with his girlfriend.

The Briton is believed to have followed the couple back to their hotel, where Longfellow dropped off his girlfriend and went out to a convenience store, Anukul said. When the American returned, the Briton was allegedly waiting for him outside his room where a fight ensued and Longfellow was stabbed, according to Anukul.

A man who identified himself as a manager at the Yanui Paradise Resort declined to disclose details, saying he was only speaking to the U.S. Embassy. The embassy could not immediately be reached for comment.

Longfellow's passport said he came from Littleton, Colo., police said. Longfellow's mother, Tammy Longfellow of Norman, told Oklahoma City television station KOCO that her son had traveled to Thailand in an effort to gain more knowledge of a form of martial arts.

She said her son joined the Marine Corps after graduating from Norman High School in 2005, with hopes of traveling the world.

"He accomplished a lot," she said. "He mastered every test they gave him. He worked his hardest and he did the best he could.

He was very competitive. He always wants to win, and that's what he did."

Police said they had issued an arrest warrant for the suspect.

Longfellow had served in the Marines and was a machine gunner for the 2nd Battalion, 7th Marine Regiment, said Matt Gronbach, of Fort Dodge, Iowa, who was in the same unit with Longfellow.

"Dashawn was a caring and loving person. One of the nicest guys you could ever be around. Great friend, brother and son. He was just a huge teddy bear that everyone loved," Gronbach said in an e-mail.