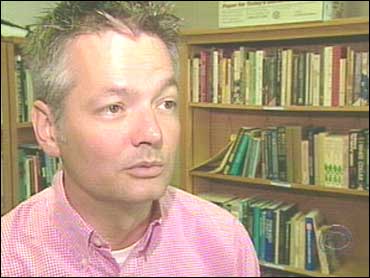 College history professor Jim Williams didn't get into teaching for the money. But when a publishing company offered him $2,500 to "review" one of its textbooks, it was tempting.

Until he discovered there was a catch.

North West Publishing stated Williams would have to do more than just review the book. He would have to require his students at Middle Tennessee State University to buy it.

"I concluded that this publisher was trying to bribe me to use a textbook that I would not normally use," he told CBS News Correspondent Jim Acosta.

And it's an expensive read -- a whopping $70 at the campus bookstore, even though virtually the same book is available on the internet -- for just $20.

"The contract said if they did not have an order for the $70 book from me for my class, I had not fulfilled my end of the contract," Williams said.

As to why North West Publishing would make such an attractive offer, Professor Williams has more than 200 good reasons. That's how many students he can cram into one of his lectures. And at more than $70 a textbook, it doesn't take an economics major to do the math.

At first, Haas wasn't suspicious of the review offer.

"When did you start wondering there was something not right about this?" asked Acosta.

"When they fired me. Ha ha," replied Haas.

He was fired by North West after the publisher called the bookstore to check up on him.

His contract was severed because he didn't sell enough books.

And the publisher was not just signing up professors at MTSU but at universities across the country.

North West declined a request for an interview, but told CBS News it's scrapping the review offers.

In an e-mail, the company did defend the practice, stating "textbook adoption was never a requirement for the program."

"Most of my students think the politicians are all liars. They think the corporate world is like Enron. That's the norm. But when they come onto the campus, we spend a lot of energy across the campus to convince them we still have integrity," Williams said.

It's a lesson Professor Williams says his students won't find in their books.