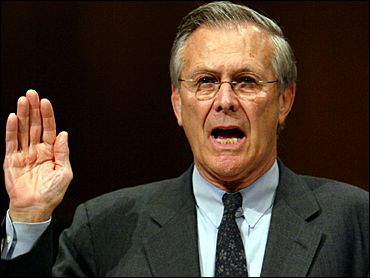 Below is the text of Defense Secretary Donald Rumsfeld's opening remarks before the Senate Armed Services Committee on Friday as transcribed by eMediaMillWorks Inc.:

Mr. Chairman, members of the committee, in recent days there has been a good deal of discussion about who bears responsibility for the terrible activities that took place at Abu Ghraib. These events occurred on my watch. As secretary of defense, I am accountable for them and I take full responsibility.

It's my obligation to evaluate what happened, to make sure that those who have committed wrongdoing are brought to justice, and to make changes as needed to see that it doesn't happen again.

I feel terrible about what happened to these Iraqi detainees. They are human beings. They were in U.S. custody. Our country had an obligation to treat them right. We didn't, and that was wrong.

Further, I deeply regret the damage that has been done. First to the reputation of the honorable men and women of the armed forces, who are courageously and responsibly and professionally defending our freedoms across the globe. They are truly wonderful human beings. And their families and their loved ones can be enormously proud of them.

Second to the president, the Congress and the American, I wish I had been able to convey to them the gravity of this before we saw it in the media.

And finally to the reputation of our country.

The photographic depictions of the U.S. military personnel that the public has seen have offended and outraged everyone in the Department of Defense. If you could have seen the anguished expressions on the faces of those in our department upon seeing those photos, you would know how we feel today.

It's important for the American people and the world to know that while these terrible acts were perpetrated by a small number of U.S. military, they were also brought to light by the honorable and responsible actions of other military personnel.

There are many who did their duty professionally and we should mention that as well. First, Specialist Joseph Darby, who alerted the appropriate authorities that abuses were occurring. Second, those in the military chain of command who acted promptly on learning of those abuses by initiating a series of investigations, criminal and administrative, to assure that abuses were stopped and the responsible chain of command was relieved and replaced.

Having said that, all the facts that may be of interest are not yet in hand. In addition to the Taguba report, there are other investigations under way and we'll be discussing those today. And because all the facts are not in hand, there will be corrections and clarifications to the record as more information is learned.

From the witnesses, you will be told the sequence of events and investigations that have taken place since the activities first came to light. I want to inform you of the measures under way to improve our performance in the future.

Before I do that, let me say that each of us at this table is either in the chain of command or has senior responsibilities in the Department of Defense. This means that anything we say publicly could have an impact on the legal proceedings against those accused of wrongdoing in this matter.

So please understand that if some of our responses to questions are measured, it is to assure that pending cases are not jeopardized by seeming to exert command influence and that the rights of any accused are protected.

Now let me tell you the measures we're taking to deal with this issue.

First, to ensure we have a handle on the scope of this catastrophe, I will be announcing today the appointment of several senior former officials who are being asked to examine the pace, the breadth, the thoroughness of the existing investigations and to determine whether additional investigations or studies need to be initiated. They're being asked to report their findings within 45 days of taking up their duties.

I'm confident that these distinguished individuals will provide a full and fair assessment of what has been done thus far and recommend whether further steps may be necessary.

Second, we need to review our habits and our procedures.

Let me be clear: I failed to recognize how important it was to elevate a matter of such gravity to the highest levels, including the president and the members of Congress.

Third, I'm seeking a way to provide appropriate compensation to those detainees who suffered such grievous and brutal abuse and cruelty at the hands of a few members of the United States armed forces. It's the right thing to do.

I wish we had known more sooner and been able to tell you more sooner, but we didn't.

Today we'll have a full discussion of these terrible acts, but first let's take a step back for a moment. Within the constraints imposed on those of us in the chain of command, I have a few additional words.

First, beyond abuse of prisoners, there are other photos that depict incidents of physical violence toward prisoners, acts that can only be described as blatantly sadistic, cruel and inhuman.

Second, there are many more photographs, and indeed some videos. Congress and the American people and the rest of the world need to know this.

In addition, the photos give these incidents a vividness, indeed a horror, in the eyes of the world.

Mr. Chairman, that's why this hearing today is important. It's why the actions we take in the days and weeks ahead are so important.

We value human life. We believe in individual freedom and in the rule of law. For those beliefs, we send men and women of the armed forces abroad to protect that right for our own people and to give others who aren't Americans the hope of a future of freedom.

Part of that mission, part of what we believe in, is making sure that when wrongdoings or scandal do occur, that they're not covered up, but they're exposed, they're investigated, and the guilty are brought to justice.

Mr. Chairman, I know you join me today in saying to the world, judge us by our actions, watch how Americans, watch how a democracy deals with the wrongdoing and with scandal and the pain of acknowledging and correcting our own mistakes and our own weaknesses.

And then, after they have seen America in action, then ask those who teach resentment and hatred of America if our behavior doesn't give a lie to the falsehood and the slander they speak about our people and about our way of life. Ask them if the resolve of Americans in crisis and difficulty, and, yes, in the heartbreak of acknowledging the evil in our midst, doesn't have meaning far beyond their hatred.

Above all, ask them if the willingness of Americans to acknowledge their own failures before humanity doesn't light the world as surely as the great ideas and beliefs that made this nation a beacon of hope and liberty for all who strive to be free.

We know what the terrorists will do; we know they will try to exploit all that is bad, and try to obscure all that is good. That's their nature. And that's the nature of those who think they can kill innocent men, women and children to gratify their own cruel wills to power.

We say to the world, we will strive to do our best, as imperfect as it may be.