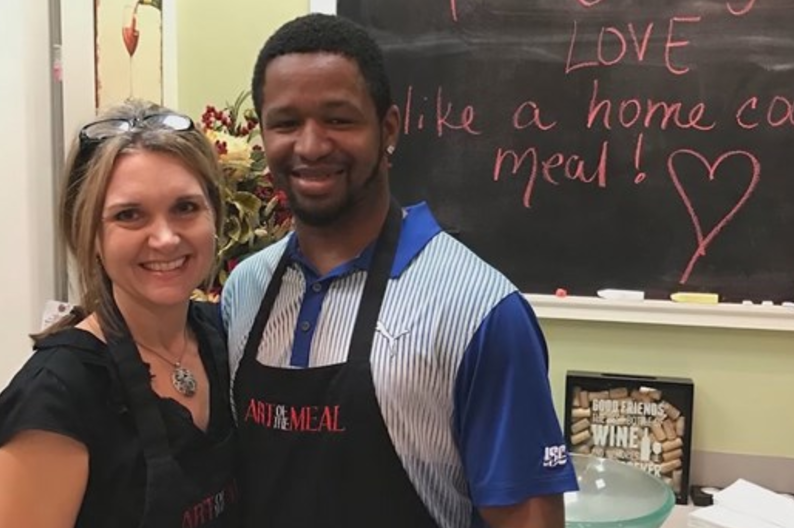 For three years, Victor Hubbard stood on a street corner -- rain or shine -- waiting for his mom to come back and get him.

Every day, residents of Kemah, Texas, passed the man as he stood between Nasa Road and El Camino Real, staring as they drove by. Ginger Sprouse, a married mother and owner of Art of the Meal, which offers cooking classes and private parties, was admittedly one of those people.

She probably saw Hubbard at least four times a day. Each time, she wondered why he was there. One day, in late December, she finally decided to roll down her window and ask.

“It really began to concern me and then I talked to a lot of people in the community and a lot of people wondered what was the deal,” Sprouse told CBS Houston affiliate KHOU.

Hubbard began to talk about his history, explaining that his mom left him, he’s been battling mental illness and he doesn’t have a place to live. Sprouse felt for the man, and decided to share his story with the world -- on a Facebook page called “This is Victor.”

“I listen to people talking around town and keep hearing ‘someone needs to do something about that guy,’” Sprouse explained in a Facebook post as she launched the page in December. “So, I will be the organizer and I hope that we as a community can be ‘someone’ together.”

Slowly but surely, the page started to take off. Dozens of people volunteered to help the man, and Sprouse led the charge.

She cooked meals, washed clothes, helped him set up appointments with a mental health professional and welcomed him into her home.

“I’m so overwhelmed by the compassion by people,” said Sprouse, as others volunteered to help.

A few days later, she created a GoFundMe page, encouraging people to donate to help the “sweet, gentle man” get back on his feet. Within two months, Hubbard received more than $14,700 in donations.

Fast forward three months later, nearly 9,000 people now follow “This is Victor” on Facebook to receive updates on his progress.

He recently landed a job as a cook in Sprouse’s kitchen. He can’t help but wear a big smile on his face.

“She came around and she kind of saved me,” Hubbard told KHOU. “She helped me. It’s like grace.”

Thanks to thousands of his Facebook fans, Hubbard was also able to connect with an uncle from east Texas. And last week, he reunited with his mom.

“I got to talk to her and I really feel like I accomplished something,” he said.

Without Sprouse’s help, Hubbard would still be standing on that street corner -- and Sprouse wouldn’t have a valued employee and new friend.

“He is a smiling, happy addition to my team,” Sprouse said. “I’m so proud.”