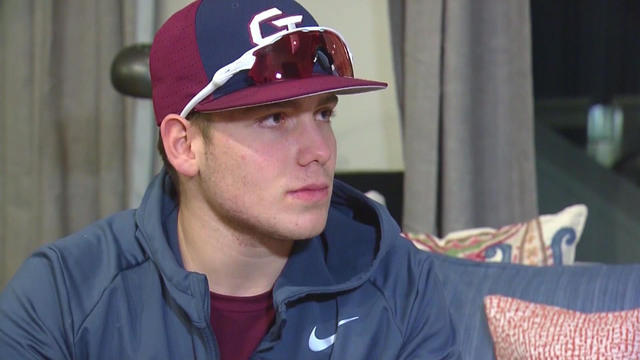 A college baseball coach in Texas was fired Thursday partly because of an email he sent to a high school prospect in Colorado. Texas Wesleyan University's coach told the senior that Colorado players have failed drug tests in the past and the university doesn't take a chance on students from the state.

At a Thursday morning press conference, University President Fred Slabach announced coach Mike Jeffcoat was fired because of the remarks and for violating National Association of Intercollegiate Athletics rules regarding player eligibility. Slabach said the school had been investigating the rule violations for about a week and reported them to the NAIA on Thursday.

On Wednesday, CBS Denver station KCNC-TV reported that Gavin Bell thought his dreams of playing baseball at Texas Wesleyan had gone up in smoke.

"I didn't know what to think, to be honest, at all," Bell told the station.

The senior at Cherokee Trail High School in Colorado emailed dozens of college coaches asking about playing at the next level.

The response from Jeffcoat, who pitched in the majors from 1983-94, was different.

The university has confirmed Jeffcoat sent an email back to Bell saying he wasn't interested because other players from Colorado, where marijuana is legal, have failed drug tests in the past.

The email says, "We have made a decision to not take a chance on Student-athletes from your state. You can thank your liberal politicians."

"What does it have to do with anything with me playing baseball because of past encounters and not taking a chance with me," Bell said.

On Thursday, Slabach said, "We would love to have Gavin here as a student."

Earlier, the Fort Worth college released a statement on the matter saying, "This email does not reflect our values and we do not condone discrimination ... including those on the basis of race, color, religion, disability or sexuality; or the political legislation of one's home state."

Bell said the reaction to Jeffcoat's response has been overwhelming.

"My intention really wasn't to do anything to hurt anybody or get anybody fired," Bell said. "It was just me talking to my coaches and my loved ones about what do I do with this."

Officials from Texas Wesleyan added they are committed to providing an inclusive campus for all.