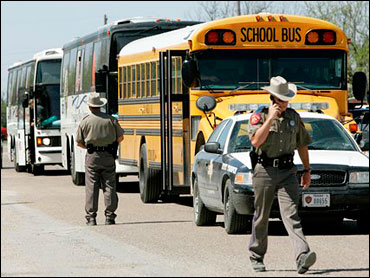 More than two months after being forced to return children from a polygamist sect to their parents, Texas child welfare authorities want eight of the youngsters put back in foster care.

Individual hearings for the four mothers of the children, ranging in age from 5 to 17, are set to begin Monday.

Child Protective Services has asked Texas District Judge Barbara Walther to return the children to foster care because their mothers allegedly have refused to limit their contact with men accused of being involved in underage marriages.

"We continue to have concerns in particular for these eight children, which is why we have asked the judge to review the case," said CPS spokeswoman Marleigh Meisner.

None of the children currently live at the Yearning For Zion Ranch in Eldorado, where authorities swept roughly 440 children into foster care in April. Officials said the Fundamentalist Church of Jesus Christ of Latter Day Saints, which established the ranch, was forcing girls into underage marriages and grooming boys to be adult abusers.

Six weeks after the children were placed in foster care, the Texas Supreme Court forced CPS to return them to their parents, ruling that the agency presented evidence of no more than a handful of teenage girls being abused. Many of the children taken into CPS custody were infants and toddlers.

In the new CPS petitions seeking foster placement for the eight children, the agency detailed alleged underage marriages involving the children's fathers or stepfathers, though only one faces any criminal charges.

Rod Parker, a church spokesman, said that even though the families are getting individual hearings this time, the argument that they shouldn't be allowed to retain custody of their children remains unfair.

The issue, as it was in the earlier case, is "whether the children are in any immediate danger simply because their parents choose to raise them in this religion," he said. "The substance of what they're doing here is fundamentally the same."

Parker also noted that the church issued a statement in June saying it would not bless underage marriages.

The FLDS church believes polygamy brings glory in heaven. It is a breakaway sect of the mainstream Mormon church, the Church of Jesus Christ of Latter-day Saints, which officially renounced polygamy more than a century ago.

Sect leader Warren Jeffs, already convicted in Utah as an accomplice to rape, awaits trial in Arizona on charges of being an accomplice to sexual contact with a minor - all stemming from alleged underage marriages within the sect.