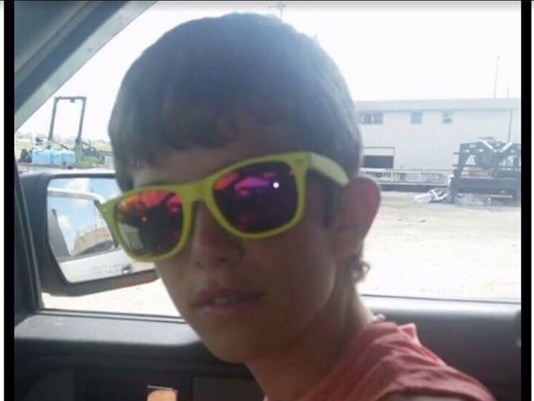 HOUSTON, Texas - A Texas teen was gravely injured by a homemade sparkler bomb so powerful, the family said it left a four-foot hole in the ground and could by heard by neighbors four miles away.

Rowdy Radford, 15, from Matagorda County, lost a leg in the explosion, and may still lose his eyesight, reports CBS affiliate KHOU-TV.

The powerful conflagration was the result of a simple experiment, his family said. The boy had wrapped just 180 sparklers tightly with electrical tape, producing a bomb so powerful that it forced an amputation of his left leg below the knee, scorches to his face and chest, and heavily damaged eyes.

Doctors at Children's Memorial Hermann Hospital in Houston won't know if they can save his eyesight until he wakes up from medical sedation, KHOU reports.

A friend was also injured in the explosion, although much less seriously, when metal shards from the sparklers were propelled into them from the explosion.

"Rowdy has always been known for making his booms and he makes his booms by scaring everybody," his aunt, Samantha Hansen told KHOU.

The family spoke to the news station to send a message to other parents and kids.

"They do it every year," said Rowdy's mom Wendy Smith. "But we didn't know this was going to be a big one."

There are readily available online tutorials on how to turn the store-bought sparklers from an innocent plaything to a large explosive. Some tutorials show people placing the powder from the sparklers inside tennis balls and lighting them. Others have shown that enough sparklers wrapped together can blow up a car.

The family said Rowdy's homemade bomb went off the instant he lit it, giving him no time to run.

"It's really hard to see your baby go through all this. I just want the parents to know don't let your kids play with fireworks, it's not worth it. It really ain't," his mom said. "It hurts because I want to see my kid talk to me and he's not because he can't. It's really rough."

His family has set up a GoFundMe page to help cover medical expenses.