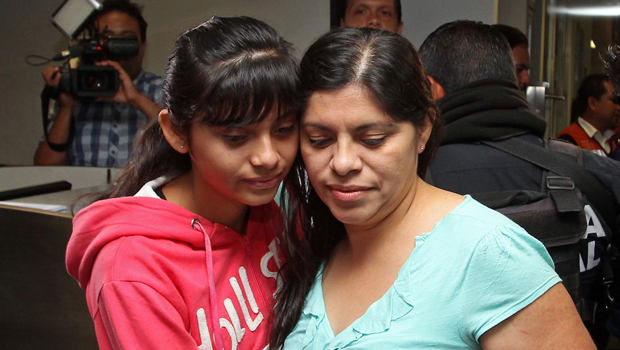 FRESNO, Texas -- The joyful tears shed by a Texas woman and her long-missing daughter after they returned to Houston from Mexico on Saturday signaled the end of an eight-year cross-border custody case that had mistakenly sent another girl to the U.S. against her will.

Houston resident Dorotea Garcia and 13-year-old Alondra Diaz arrived at Bush Intercontinental Airport on Saturday morning after a judge in the Mexican state of Michoacan on Friday returned the girl to Garcia following DNA tests that showed they are mother and daughter.

An emotional Garcia told reporters later Saturday that the return of her daughter was a beautiful moment.

"What I had been wishing for so many years. Finally I can touch her. She is with me and I am grateful to God," Garcia said in Spanish as she stood in front of her suburban Houston home and embraced her daughter.

Diaz, a native-born U.S. citizen, was taken to Mexico in 2007 by her father, Reynaldo Diaz, without her mother's consent after the couple divorced. Alondra Diaz's whereabouts hadn't been known until recently.

The case gained attention last month after a judge in Mexico erroneously ruled that 14-year-old Alondra Luna was the missing girl and ordered her turned over to Garcia, who brought the girl to Houston. DNA testing later showed she wasn't Garcia's daughter and she was returned to her real family in Guanajuato.

Upon her return to her mother's home, Diaz was greeted by balloons and signs on the garage door that said in Spanish, "Welcome Alondra" and "We love you very much, Alondra."

Diaz, who would ask her father where her mother was, said she was grateful that her mother didn't stop looking for her.

"It's wonderful that a mother would do so much," she said in Spanish.

Mother and daughter hugged each other throughout the news conference, and Garcia became emotional several times.

When asked about what had happened with the misidentification of Luna as her daughter, Garcia said she wished Luna well but now wanted to focus on her daughter's return.

Video recordings circulated widely in late April, showing Luna screaming and desperately resisting as Mexican federal police dragged her away from her middle school in the central state of Guanajuato.

The judge that case denied requests from Luna and her family for DNA tests, saying it was not within her authority.

Alondra Luna's family has unsuccessfully sought an apology from the judge. Prosecutors in Michoacan are investigating the mix-up, according to CBS affiliate KHOU in Houston.

The media spotlight prompted Reynaldo Diaz to deliver the real Alondra Diaz to family members who then presented her to authorities, saying she was prepared to go live with her mother. The judge waited for DNA confirmation in Alondra Diaz's case.

Garcia, who had an emotional reunion with her daughter this week in a courtroom in Los Reyes, Michoacan, said she will not prevent her ex-husband from being able to speak with their daughter.

"I am grateful he decided to give us this opportunity, to my daughter and me," Garcia said.

Diaz said she will miss her father but knows that she will still see him.

Garcia said she is now looking forward to a normal life with her daughter: school, spending weekends together, movie nights.

"All that we couldn't do before," she said.