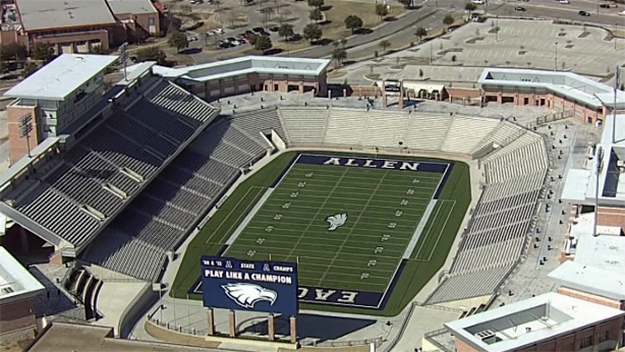 Not to be outdone, school officials near Houston next year plan to unveil a $62 million stadium-development plan. And a district north of Dallas is considering spending more than $50 million on its own football arena.

Are such exorbitant price tags for high school stadiums the new normal? Only in Texas, it seems. Football fields in other states are far less expensive, often in the range of $5 million to $10 million. One Southern California district built four stadiums for about $72 million.

Texas school officials say their districts are teeming with new students and that the stadiums reflect their communities' need for larger, more modern facilities.

"The size dictated the cost, no question," said Tim Carroll, spokesman for the Allen school district, which built the $60 million stadium about 25 miles northeast of Dallas. "Some say we build things with no concern for expense, with columns made of marble, but that's not the case."

Many of the facilities are designed to serve multiple schools and multiple sports and host special events. And they should last for generations.

However, as CBS Dallas station KTVT reported, the $60 million stadium in Allen was closed less than two years after it opened when extensive cracking was found in the elevated concourse.

The stadium was closed in February of 2014 because of safety concerns and wasn't reopened until repairs were complete in June of 2015, according to KTVT.

A big-league sports stadium could easily cost hundreds of millions of dollars, with some surpassing $1 billion. So a $50 million or $60 million project seems modest by comparison. But it's an extraordinary amount to spend on teen athletes. The result is a high school stadium that resembles a professional facility, with gleaming digital scoreboards, turf fields and expansive press boxes.

Ross Kecseg with the Austin-based fiscal watchdog group Empower Texans calls the money being spent on high school stadiums "excessive." The larger problem, he says, is school officials who combine outsize expenditures in one large bond package, leaving voters with no option to approve or reject one project over another. New school construction, building renovations, requests for more buses and other needs may be wrapped into a single request.

"When they put these propositions on the ballot, they put a whole lot of other things with them," Kecseg said. "By law they're allowed to separate the different requests ... but they lump them all together in an all-or-nothing proposition."

The Allen stadium, with 18,000 seats, stands out for its features and glamour even in Texas, where high school football under the "Friday Night Lights" has been mythologized in print and on television. The Eagles, a powerhouse team that hangs championship banners like tinsel on a tree, drew 22,000 people for their first game at the new field, Carroll said.

Allen has 9,800 season ticket-holders, a number that exceeds the 7,000 seats in the high school stadium that opened last year in the Los Angeles suburb of Whittier at a cost of $17.5 million.

Carroll said various factors pumped up the stadium's price tag, such as high construction costs in a region booming with new homes and corporate towers. The size of the facility, he added, was dictated by the thousands of parents and spectators who turn out, not just for football but also to see one of the largest marching bands in the country.

The Eagles compete against other large regional schools that travel with thousands of fans of their own.

"It seemed as though the further people were away from North Texas, the more questions we got," Carroll said of the media attention that followed after the cost was disclosed.

That amount will be exceeded by the stadium scheduled to open next year in Katy, west of Houston, likely making it the most expensive high school football stadium ever built -- a distinction previously held by Allen.

By the time the Katy complex opens, the district will have eight high schools and each will play their football games at the 12,000-seat stadium. Soccer will be played there too.

Katy voters in 2014 approved the construction as part of a whopping $748 million bond that will pay for new schools for a district of 74,000 students that's growing at a rate of 2,000 students a year.

"It's not just a high school football stadium," district spokeswoman Denisse Coffman said. "This is a student activity facility that's going to benefit students across the district."

As part of a spending plan approved by voters in foothill communities east of Los Angeles, four new stadiums were built at high schools that did not previously have any such facilities, according to Mat Holton, superintendent of the Chaffey Joint Union High School District.

The stadiums cost a combined $72 million, but with each seating about 5,000 people, they are smaller than the ones in Texas.

Officials in McKinney, north of Dallas, want to build a 12,000-seat stadium and are hoping voters on May 7 approve a broad bond package that includes $50.3 million for the complex. Another $11 million would be spent for site preparation, infrastructure upgrades and other work.

Three high schools would play their games at the stadium, which would also have a conference area for hosting teacher training, banquets and other events, according to school board President Amy Dankel. Soccer and lacrosse teams also would use the field.

"We really do believe that with the growth in North Texas, with new communities coming in, that will double our student population," Dankel said.