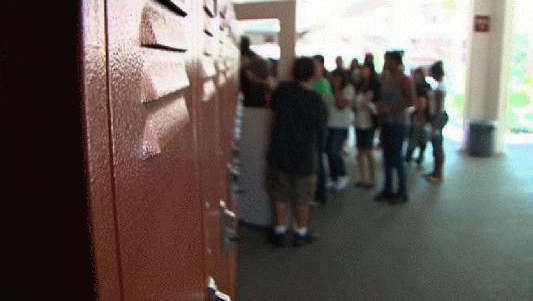 AUSTIN, Texas - A judge declared Texas' school finance system unconstitutional again Thursday, finding that even though the Legislature pumped an extra $3 billion-plus into classrooms last summer the state still fails to provide adequate funding or distribute it fairly among school districts in wealthy and poor areas.

State District Judge John Dietz's written ruling reaffirms a verbal decision he issued from the bench in February 2013. He declared then that the state's so-called "Robin Hood" funding formula fails to meet the Texas Constitution's requirements for a fair and efficient system that provides a "general diffusion of knowledge." He also found then that the system levies local property taxes in a way tantamount to a state income tax, which is also constitutionally prohibited.

Dietz's ruling will almost certainly be appealed to the Texas Supreme Court by state Attorney General Greg Abbott's office - a process that should take months. If the high court again rules against the state, it will be up to the Legislature to design a new funding method. But the appeals process may not be over until well after the 2015 session has ended.

Abbott's office said Thursday that it had not yet seen the ruling and couldn't immediately comment.

The case grew out of the Legislature's cutting $5.4 billion from public education in 2011, prompting more than 600 school districts responsible for educating three-quarters of Texas' 5 million-plus public school students to sue.

They claimed they no longer had sufficient resources to educate students. The lawsuit cited Texas' school enrollment growth of nearly 80,000 students per year due to a booming population and the Legislature's increased demands for standardized testing and curriculum requirements to graduate high school.

Schools in rich and poor areas were on the same side in the case because the Robin Hood system requires districts with high property values or abundant revenue from oil or natural gas interests to turn over part of what they collect in property taxes to poorer districts. Poor districts said that wasn't enough, while schools in wealthy areas argued that voters often refuse to approve local tax increases they might otherwise support since much of the money would go elsewhere.

Dietz's initial verbal ruling came after 44 days of testimony, but he held off compiling a written ruling that would start the appeals process. Four months later, lawmakers restored more than $3.4 billion to classrooms, translating to a 2014-2015 public education budget worth nearly $56.3 billion, and slashing the number of standardized tests required for high school graduation from 15 to five.

Dietz then reopened the case this past January, hearing testimony on how the extra funding and curriculum standards overhaul had affected school districts. But the new evidence wasn't enough to change his mind.

Abbott's office argues that while the system is flawed, it's not at breaking point. Though Abbott himself is running for governor and hasn't argued the case, the issuing of Dietz's ruling in writing may make the case a campaign issue. Abbott's Democratic opponent, state Sen. Wendy Davis, has claimed it makes him anti-school.

The case is the largest of its kind in Texas history, but most of the issues aren't new. Dietz also found the state school finance system unconstitutional after a lengthy trial in 2004. Seven major court battles have now raged since 1968 when students and parents in San Antonio first sued, alleging that, despite sky-high local property taxes, their urban schools featured cracked windows and un-air conditioned classrooms while schools in the wealthy suburbs were comparatively luxurious.