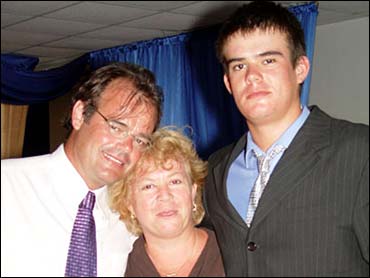 A volunteer rescue group from Texas launched a major ground and ocean search Saturday for an Alabama teen who disappeared nearly four weeks ago while on a school trip.

Also Saturday, a judge was to decide whether to allow prosecutors to continue holding justice official Paul van der Sloot, father of 17-year-old Joran van der Sloot, the honors student from the island who is believed to be one of the last people to see 18-year-old Natalee Holloway the night she went missing.

Texas EquuSearch's 24 volunteers, including eight rescue divers, planned to use sonar, sniffer dogs and divers to attempt to achieve what hundreds of officials and volunteers before them have failed to do.

"We are holding out hope that Natalee is alive, but we know the odds are against us," Tim Miller, director of the Dickinson, Texas-based group, said Friday on the eve of the search.

The volunteers arrived late Friday, at the request of Natalee's uncle, who lives in Houston. They brought four dogs trained to sniff out human remains, as well as sonar equipment that will be used in searching the coastal waters. Miller said the group would remain in Aruba "until we find Natalee."

Miller said pro-athletes in the United States had approached him about helping with the search, but he declined to say who they were or how they might participate.

He said he arrived in Aruba on Thursday to meet with authorities, cross-check where they had searched, and plot out new sites.

Miller said his initial meeting with police Superintendent Jan van der Straaten had "been tense," but that the two had come to an agreement about the search. Miller declined to say what the agreement was, but said the search parties would be careful not to let the news media interfere.

"If we find something that is evidence, we certainly don't want your cameras on it," Miller said, declining to say where searchers would begin Saturday.

Miller said that within a few days, they would ask local Arubans to help in the searches.

Previous searches by Aruban police, Dutch Marines and thousands of volunteer islanders and tourists have yielded no trace of the honors student, who went missing May 30, the last day of a five-day trip with 124 fellow students to celebrate their high school graduation. Her passport and packed suitcase were found in her hotel room.

Five men have been arrested in her disappearance, but no one has been charged.

Miller said some of Holloway's family members had asked his group to undertake the search after nearly four weeks of efforts by authorities and volunteers had produced few results.

He said previous searches had been thorough, but that "we have the resources and equipment that hasn't been used in the ground or water that may help us" find the missing teenager.

"He says 'Mom, I dropped the girl at the beach. I walked with her, I left her because she wanted to stay there. I left and I don't know what happened,'" the mother, quoting her son, told CBS News Correspondent Kelly Cobiella. "'I should have brought her to a responsible adult. That I blame myself, and I will blame my whole life, but the truth will come out and I will be out of here soon.'"

Holloway's mother, Beth Holloway Twitty, said she was pleased with the arrest of the elder van der Sloot.

"We are very pleased that the investigation is progressing," she said. "We feel like this will lead to more information to give us the answers we need for finding Natalee."

But Anita van der Sloot insists Aruban authorities are holding her son and now her husband because they were under pressure — something Mariaine Croes of the Aruban Attorney General's office denied on CBS News' The Early Show Friday morning.

"And your husband?" asked Cobiella.

"Yes of course he's innocent. This is the most ridiculous thing. He's a judge. He's full of integrity," van der Sloot replied.