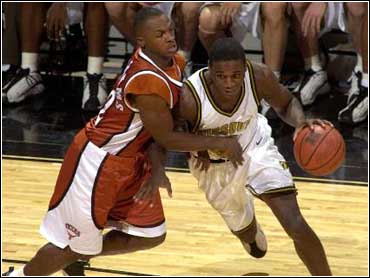 Texas won without a big game from the big man.

Missouri double-teamed 7-foot Chris Mihm constantly and the Tigers' backup center collected four fouls in seven minutes guarding him, but the Longhorns' guards came through in a 66-63 victory Saturday.

Mihm was held to 15 points and seven rebounds seven below his averages in both categories. The backcourt stepped up with 25 of the last 28 points as 18th-ranked Texas won for the sixth time in seven games.

"I got an opportunity with a shot I can make and I knock it down, just like that," said Kelly, a 76 percent foul shooter. "Nothing special about it or anything."

Missouri has blown second-half leads at home against ranked opponents in its last two games, letting a five-point advantage slip away in a 72-62 loss to No. 17 Iowa State on Wednesday. Trailing by one, Missouri missed two chances to regain the lead in the final half-minute when Jeff Hafer's layup rolled off the rim and T.J. Soyoye's tip also rolled out.

Hafer got the rebound, but then fumbled it out of bounds.

"I said, `This is two,"' teammate Kareem Rush said. "And the ball rolled out. The ball just didn't bounce our way."

Kely's free throws put Texas ahead 66-63, and Missouri (14-8, 7-3) got off only one shot on its last possession, an air ball from Brian Grawer from about five feet beyond the 3-point arc.

Mihm jumped out on the final shot.

"I just wanted to affect it," Mihm said. "He was way out, he was beyond NBA 3-point range. He's capable of hitting it from out there, though."

Soyoye, Missouri's center, aided Texas' comeback when he drew the fourth foul on Mihm with 6:17 to go. Mouth agape, he then got in Mihm's face for several seconds afterward, drawing a technical. Soyoye made one of two foul shots, and Ivan Wagner hit both ends of the technical to cut the gap to 51-50.

After the inbounds, Kelly hit from the 3-point line to give Texas the lead.

"I don't regret anything," Soyoye said. "I don't know why the referee called the technical foul. I didn't say anything to him, nothing."

Coach Quin Snyder was terse on the subject.

Missouri lost despite hitting 10 3-pointers and outrebounding its opponent for only the eighth time all season, holding a 45-36 advantage. The Tigers had been 7-0 when holding the rebound edge, but shot only 37 percent.

Mihm also blocked four of Johnnie Parker's shots to hike his school career record to 247. Muoneke had 12 points and seven rebounds, and Wagner had 12 points, six rebounds and five assists.

Rush and Clarence Gilbert each had 12 points for Missouri. Rush had seven of his points in the final five minutes.

Soyoye's slump continued for Missouri. He is averaging 4.5 points the last four games after six straight games in double figures.

Missouri held Texas to 34-percent shooting in the first half and ended the half on a 11-3 run, including 3-pointers from Gilbert, Grawer and Rush, for a 30-25 lead.