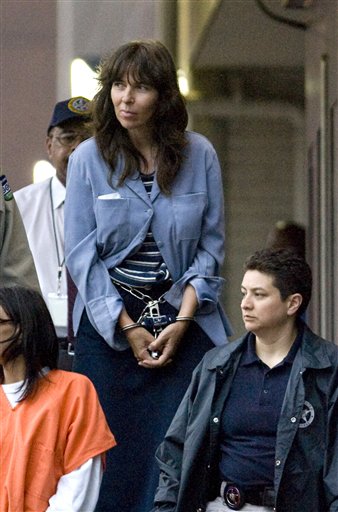 (CBS/AP) HOUSTON - A polygamist sect leader's daughter, Jacqueline LeBaron, faces up to five years in prison after pleading guilty in connection to the shotgun killings of an 8-year-old girl and three sect members who had left her father's church.

LeBaron, the daughter of deceased Utah polygamist Ervil LeBaron, was a fugitive for nearly 20 years. She expressed remorse Thursday as she pleaded guilty to conspiracy to obstruct religious beliefs as part of an agreement with prosecutors. She had been facing 14 counts, including murder, conspiracy to commit murder and racketeering conspiracy. The most serious charges carried a potential sentence of life in prison.

During the hearing, LeBaron said that while living in Mexico in May 1988, she got a call from her brother William, who ordered her to give $500 to their sister Cynthia so she could travel to Houston. The money came from proceeds the LeBarons got from stealing trucks in the U.S. and then selling them in Mexico, LeBaron said.

"There was a group of siblings in Texas. (Cynthia) was to join them. She was to look for some people who would be punished," said LeBaron's attorney, David Adler.

The individuals who were being "punished" were Ed Marston and brothers Mark and Duane Chynoweth, three former church members who had left after having a falling out with the sect.

Authorities say LeBaron and her family were following their sect's doctrine of blood atonement, in which defectors were killed. The 8-year-old girl who was killed was the daughter of one of the defectors. Authorities said she was killed because she had witnessed her father's death.

Jacqueline LeBaron was among six family members charged in the killings.

Three other LeBaron family members were convicted on civil rights violations and witness tampering in 1993 and sentenced to life in prison. Another was convicted later of ordering the deaths and was sentenced to 45 years in prison. The youngest, who was 16 at the time of the killings, pleaded guilty in the child's death and served five years in prison.

Jacqueline LeBaron's father Ervil died in 1981 in Utah state prison, where he was serving a life sentence for masterminding the 1977 murder of Rulon Allred, the leader of another polygamist group.

LeBaron's attorney David Adler said his client was "more of a victim" because of the difficult life she endured growing up in her father's polygamist cult and her belief she could not say no to playing a small role in the killings.

"I am not saying she did not commit a crime," Adler said. "But we're hoping the judge takes into account that she couldn't say no. She was in fear of her safety."