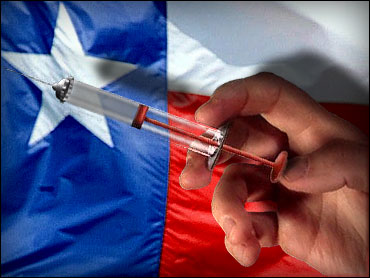 If Perry allows the bill to become law - he has not publicly expressed opposition - the state could begin testing tens of thousands of students at the start of the coming football season. It would be the largest high school steroids testing program in the country.

"It will help secure healthy and safe lives for our young people," said Rep. Dan Flynn, R-Van, the House sponsor of the measure. "Coaches, parents and fans are going to appreciate it."

Don Hooton of the Taylor Hooton Foundation – established to fight steroid abuse – is among those who testified before Texas state lawmakers in support of the legislation.

Hooton's foundation bears the name of the 17-year-old high school athlete son he lost in 2003 to a suicide believed caused by abuse of anabolic steroids.

In an interview with CBS News correspondent Hari Sreenivasan, Hooton says testing is the only deterrent that will work.

"They're not doing it to get high," says Hooton. "I am convinced that this intelligent group of kids, if they think there's a reasonable chance of getting caught, won't make the decision to use the steroids in the first place."

Steroid testing has been a major component of Republican Lt. Gov. David Dewhurst's campaign to protect children. Athletes who test positive, or refuse to be tested, could be suspended from play. Athletes in all sports, from football to wrestling to tennis, could be tested.

"I made steroid testing of high school athletes a priority this session because I believe it will deter young people from putting that poison in their bodies and save lives all across Texas," Dewhurst said.

The House of Representatives voted 140-4 to send the bill to Perry. It requires the state to pay for testing, rather than force schools to raise ticket prices to cover the cost. The University Interscholastic League, the state's governing body for public school sports, will run the program.

Budget planners set aside $3 million per year, and the program now requires a "statistically significant sample" of students, said Sen. Kyle Janek, a Houston Republican who sponsored the bill.

The original Senate version would also have put specific penalties for positive tests into the law. Lawmakers instead decided to give UIL officials flexibility to set those rules.

Flynn, however, said he expects athletes to be suspended if they test positive or refuse to take a test.

About 130 of Texas' 1,300 public high schools already test for steroids.

Is it COVID? RSV? Or the flu? How to tell
Thanks for reading CBS NEWS.
Create your free account or log in
for more features.
View CBS News In
CBS News App Open
Chrome Safari Continue
Be the first to know
Get browser notifications for breaking news, live events, and exclusive reporting.