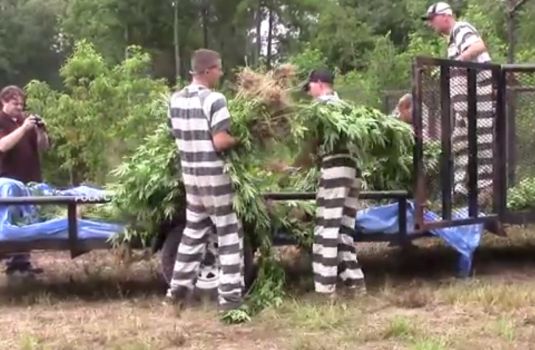 Police in Texas are clearing thousands of marijuana plants today. The crop is part of sophisticated operation that could end up being the largest bust of its kind in state history, CBS News' Tim Wetzel reports.

The grow was discovered in Goodrich, about 70 miles northeast of Houston.

When officials were alerted to the presence of marijuana in Goodrich, an isolated part of Texas wilderness, they stumbled onto an operation so advanced it had avoided detection for months.

Inmates from the Polk County jail joined over 70 officers from up to 12 different agencies. They uprooted nearly every marijuana plant discovered on the massive grow operation, and found an elaborate hydration system that made use of a nearby creek.

"They had pumps that were set inside the creek banks and a hosing system that ran back to the fields to where they just turned the pumps on. The pumps would run through the hoses and subsequently through the fields," said Polk County Chief Deputy Byron Lyons.

A deer hunter scouting the area discovered the plants over the weekend and immediately called police. Nearby, a makeshift campground was found littered with food, clothing, and equipment. Officials say the growers had likely been living there for at least five months, avoiding detection by land owners and law enforcement.

"They'll go inside the overgrown area and they'll clean out a spot inside of it, to where unless you're actually right inside the plant area, you won't even know it that they're there," Lyons said.

Operations like this are a growing problem in east Texas, where dealers have set up shop to avoid heightened security along the U.S.-Mexican border.

So far, more than 44,000 plants have been cleared away, but an aerial search revealed the existence of up to 16 additional fields.

Once finished, the total haul could top 100,000 plants, making it one of the largest busts in Texas history.

One person has been taken into custody in connection with the operation, and police are now running forensic tests to help identify additional suspects. They say more arrests could be made in the coming days.