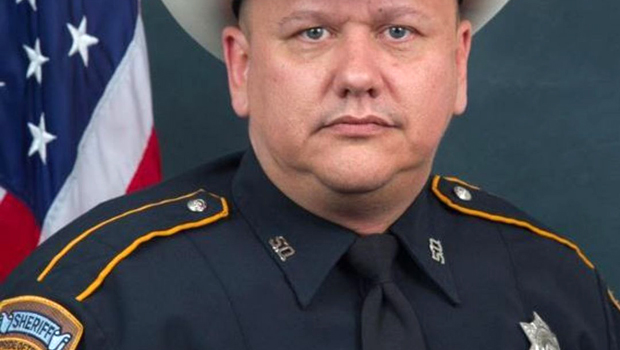 Update:Officials say a suspect has been arrested in the shooting.

HOUSTON -- Authorities are still looking for the suspect in the fatal shooting of a sheriff's deputy at a suburban Houston gas station, Harris County Sheriff Ron Hickman said.

Hickman said at a Saturday afternoon news conference that the working motive for the Friday night shooting death of Deputy Darren Goforth was "absolute madness."

Surveillance video showed there were people at the gas station in suburban Houston about 8:30 p.m. when Goforth was ambushed by a man and shot several times. Hickman asked that they reach out to the sheriff's office with any information.

District Attorney Devon Anderson had strong words at the news conference, saying it is "time for the silent majority in the country to support law enforcement" and that there should not be "open warfare on law enforcement officers."

Authorities said the investigation is ongoing.

Earlier, spokesman Deputy Thomas Gilliland said officials were speaking with a person of interest in connection with the shooting and have obtained a search warrant for the two-story brick home where the person lives. No arrests have been made, Gilliland said.

Nine patrol cars, including one with the words "crime scene unit" on the side of the vehicle, were parked near the home, which is about a quarter-mile from the gas station in Copperfield, a middle-class to upper middle-class area of Harris County that is unincorporated.

Police described the suspect as a male with a dark complexion, about 5-foot-10 to 6 feet tall, wearing a white T-shirt and red shorts and driving a red or maroon pickup-style truck with an extended cab. Authorities did not say what race they believe him to be.

Goforth was a 10-year veteran of the force, had a wife and two children, Hickman said.

"In my 45 years in law enforcement, I can't recall another incident so cold-blooded and cowardly," Hickman said.

An impromptu memorial had begun Saturday morning at the Chevron station pump that Goforth was using on Friday night, a pile of balloons, flowers, candles and notes, including one that said, "Gone but never forgotten R.I.P. Deputy Goforth." The gas station was open, but that pump was closed.

Brian McCullar knew Goforth because the deputy had patrolled his neighborhood, which is about two miles from the gas station, and spoke often.

"You're talking about a guy that made a difference."

Goforth had traveled to the Chevron station after responding to a routine car accident, Gilliland said.

"I can tell you with diligence and justice the suspect will be caught," Gilliland told the newspaper. "And he will be brought to justice ... This is a very callous individual."

Harris County Sheriff's deputies and homicide investigators joined officers from other agencies, including the Texas Department of Public Safety and the Houston Police Department, in the search.

"This is a very tough moment right now for the Harris County Sheriff's Office," Gilliland said. "Keep us in your prayers and in your thoughts."

"We've been warned of things like this, because of public sentiment nationally and events over the last few years ... It's just horrific. That's the only way to describe it."