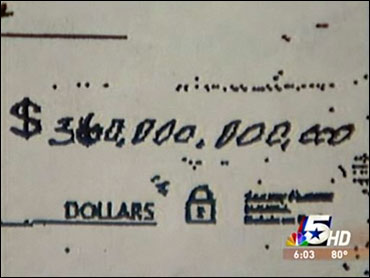 Charles Ray Fuller must have been planning one big record company.

The 21-year-old North Texas man was arrested last week for trying to cash a $360 billion check, saying he wanted to start a record business, authorities said. Tellers at the Fort Worth bank were immediately suspicious - perhaps the 10 zeros on a personal check tipped them off, according to investigators.

Fuller, of suburban Crowley, was arrested on a forgery charge, police said. He was released after posting $3,750 bail.

Fuller said his girlfriend's mother gave him the check to start a record business, but bank employees who contacted the account's owner said the woman told them she did not give him permission to take or cash the check, according to police.

In addition to forgery, Fuller was charged with unlawfully carrying a weapon and possessing marijuana, Fort Worth police Lt. Paul Henderson said.

Officers reported finding less than 2 ounces of marijuana and a .25-caliber handgun and magazine in his pockets, police said.

Fuller couldn't be located for comment by The Associated Press on Friday because there were no phone listings for him in the Fort Worth area.