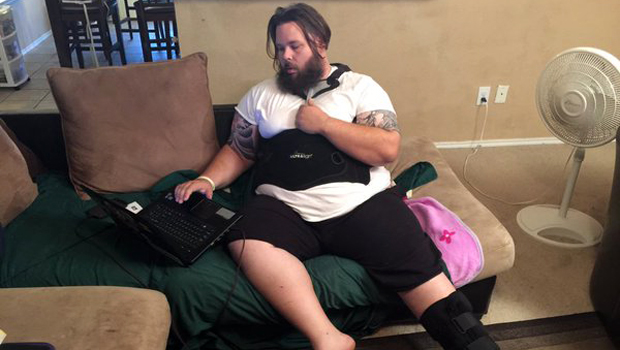 IRVING, Texas -- A Texas man felt he is alive partly due to being an avid "gamer" after a car crashed into his apartment while he played video games on his Xbox, CBS Dallas station KTVT reports.

Ben Rose said he was playing Fallout 4 last Sunday when the driver of a Hyundai Sonata plowed through the wall of his home.

"You play in a wasteland, and then your apartment turns into a wasteland," Rose told KTVT.

The car came completely through the wall and hit him. The impact fractured his vertebra and sliced his Achilles tendon.

"Cars versus people don't really end up well. So I really thought it was over," said Rose. "Everybody asks, 'Were you walking in your parking lot? Or were you in your car? What do you mean she drove through your apartment?'"

Rose believes had he not been sitting on his special rolling "gaming" chair, he might not be breathing.

"The chair is what saved me, without a doubt. That took the impact. It pushed me out of the way. It kept me from going under the car," he said.

Irving police believe the driver accidentally hit the accelerator instead of the brakes when she was attempting to pull out of a parking space at the apartment complex.

The driver did not have insurance. She was cited, and Rose is now left to pay for the bills.

Friends have already started helping Rose get back on his feet through an online fundraiser.

"That's almost two-months salary for me that people have raised. That's a lot. That's a lot when you're living paycheck to paycheck," said Rose.

But his road to recovery will be long.

"I can't take back what she's done or what happened, but I'm still not in the hospital," he said. "I'm lucky it's not worse. That's all I'm going on."

Irving police said no charges will be filed against the driver of the vehicle that struck Rose.