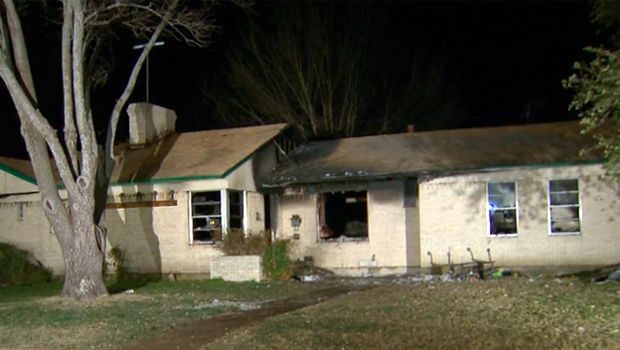 PLANO, Texas - A Texas man died after he went back inside a burning house north of Dallas to retrieve his cell phone, CBS Dallas-Fort Worth reports.

Neighbors called 911 to report the house fire, and crews arrived three minutes later to find the building fully engulfed in flames. Three people lived in the home: the victim, his daughter and a roommate.

"The tragedy here is that the three adults living in the home actually made it out of the home, realized that they had no way to call 911, no phone with them," said Capt. Peggy Harrell of the Plano Fire Department. "So two of the residents - two males - actually re-entered the burning home."

One of those men, who has not yet been identified but is said to be in his early 70s, did not make it back out alive. No other injuries were reported. The cause of the fire, which was extinguished quickly, is still under investigation.

Neighbors said that they were sad, wishing that their longtime friend had not gone back inside of his house while it was on fire. He had been living in the home for more than 20 years.

"He could've come to any of the neighbors' houses to call 911," said Nakita Weseman. "I know he realized, probably, he didn't have his cell phone, but that's definitely replaceable, but he wasn't."

Harrell warned residents to never run inside of a burning structure, noting that nine out of 10 people, nationally, do not make it back out alive.

"Fire and smoke conditions change rapidly," she said, "and the fast-moving fire and toxic smoke can quickly incapacitate a person and make it impossible to get out."