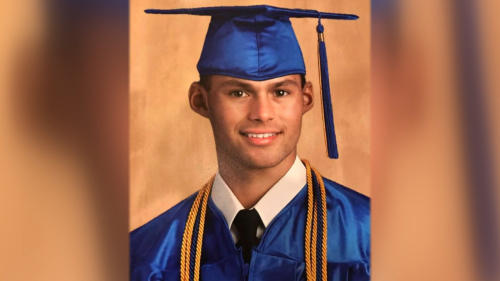 BROCK, Texas -- Every diploma handed out this spring marks a life accomplishment for graduating seniors. But for one student in particular, that accomplishment has been life itself.

Ethan Tepera is part of the class of 2017 at Brock High School, west of Fort Worth. In some ways, he's just like every other graduate whose excited to move on to college.

But graduation is not something Tepera ever really thought was possible. At 13 years old, he was bald from leukemia treatments. The community in Arlington, Texas, where his family lived at the time, organized a hurried search for a bone marrow donor.

"We found a young lady in Houston and she was my first bone marrow donor," Tepera told CBS Dallas-Fort Worth. "I was mad at God, mad at the world, mad at what my circumstance had come out to be."

But with time, his anger and body healed. Tepera was able to celebrate his one-year anniversary before the cancer returned.

"To not go through the treatment again would be just to throw my life away," he said.

Tepera's illness was originally discovered after a football game. His headaches and pain turned out to be from the cancer. The treatment required to recover not once, but twice, left his bones in brittle condition.

Football and tackling were out, but fishing tackle was in.

"I think it was just the serenity," Tepera said of the pastime that became his passion. "The peace that you kind of get when you're out here."

He ultimately developed a school fishing team, which led to his plans to pursue studying fisheries science at Texas A&M in the fall.

While graduation was a big accomplishment for Tepera, he says his impact on other leukemia patients has been an even greater achievement. To date, 21 people have found bone marrow matches from the original drives to find a donor for Ethan.