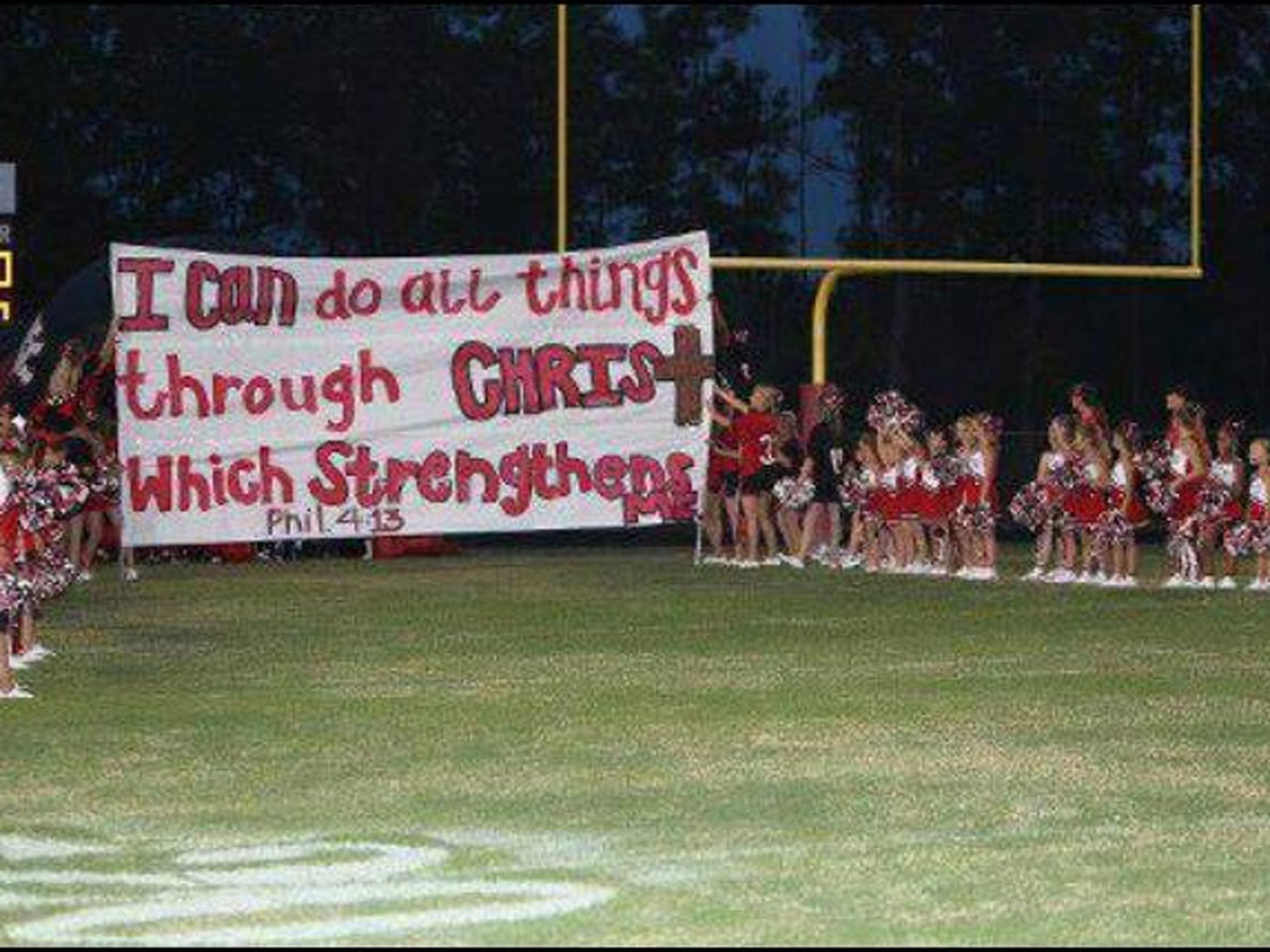 (CBS/AP) HOUSTON - Cheerleaders from a small southeastern Texas town have been told that they can no longer use Bible verses on their football game banners, leading to outrage in the community.

Most people in Kountze viewed the banners as evidence of the students' admirable moral upbringing - Christianity and the Bible always had been fundamental to this town of 2,100.

But someone complained to a foundation that fights for the separation of church and state, and by Tuesday, a day after receiving a letter from the Freedom From Religion Foundation, the superintendent banned the banners, and the town became embroiled in a controversy that has touched other communities nationwide.

On Thursday, a judge granted a request by the nonprofit Liberty Institute law firm to temporarily bar the implementation of the ban. It also set a hearing for early October when the sides will be able to make their arguments. The cheerleaders planned to raise their 20-foot banners at Thursday evening's junior varsity football game.

People in the town 90 miles northeast of Houston talk of little else. Parents and students have plastered pictures of the banners - some of which quote scripture, declaring "I can do all things through Christ that strengthens me" - on their Facebook pages. A Facebook group created after the ban, Support Kountze Kids Faith, had more than 36,000 members by late Thursday. They argue that it was the students' decision to "give the glory to God this year," and they pledge to help the children make sure their opinions and rights are not violated.

Superintendent Kevin Weldon gently explains to every parent who calls that a 2000 U.S. Supreme Court precedent-setting decision requires religion to be kept out of public schools. Some parents support his decision. Others say they will back their children's First Amendment right to hang the banners.

Weldon himself is torn, but he has to abide by the judge's injunction, and will let the attorneys decide whether to fight the institute. He added to KVUE-TV that while people in the stands and students are allowed to express their religious beliefs, no person officially representing the school as part of a team or school-sponsored event can.

On one side is the Freedom From Religion Foundation, a Madison, Wisconsin-based nonprofit that challenges any religion in public schools.

"I've never heard of this kind of school problem, this kind of a violation at a public school where students would be expected to run through Bible verses to play football," said the foundation's president, Annie Laurie Gaylor. "It's a new and creative way to work religion into our public schools."

On the other side is the Liberty Institute, a Plano, Texas-based nonprofit law firm that says on its website it is dedicated to "restoring religious liberty across America."

"It's an important and fundamental freedom students have to engage in free speech," said Mike Johnson, senior counsel for the institute. "They are not asking anyone to believe in Christianity or accept the faith. They are just well wishes."

Cheerleader Macy Matthews says no school money was used and the signs weren't made on school property.>

"I'm actually thankful for (the controversy)," cheerleader Ashton Jennings said to KVUE-TV. "Because if someone hadn't complained, or if there hadn't been any opposition we wouldn't have this chance to spread God's word in this big of a way."

But Tanner Hunt, attorney for the Kountze Independent School District, believes a Supreme Court decision in 2000 that barred prayer at the start of a high school football game sets the precedent.

Hunt said, "The answer was clear: they must cease and desist."