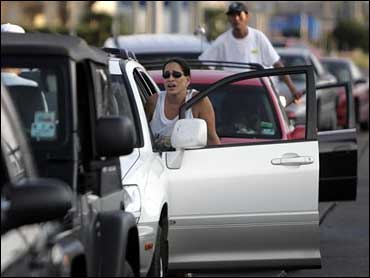 It was envisioned as the anti-Katrina plan: Texas officials sketched a staggered, orderly evacuation plan for Hurricane Rita and urged people to get out days ahead of time.

But tangles still arrived even before the storm's first bands. Panicked drivers ran out of gas, a spectacular, deadly bus fire clogged traffic, and freeways were red rivers of taillights that stretched to the horizon.

In an age of terrorist danger and with memories of the nightmare in New Orleans still fresh, the Texas exodus raises a troubling question: Can any American city empty itself safely and quickly?

Thousands of drivers were stranded for hours Friday to the north and west of Houston, many stuck in extreme heat and out of gas as gas trucks, rumored to be on the way, or at least buses to evacuate motorists, never came.

Those drivers appeared to be off the roads by nightfall Friday. Abandoned cars, marked with orange tape by police, littered the roadsides.

They were frustrated, angry and growing desperate, scattered and stranded across a broad swath of the state as the monster storm bore down.

"It's been terrible, believe me," said Rosa Castro, who had driven more than 17 hours by Friday. Her sister behind the wheel, seven children in tow, the car was idling on less than an eighth of a tank of gas.

Castro was hoping to get gas from a lone Shell station that had opened north of Houston. But her car was at the end of a miles-long line.

"I wondered why so many people in Katrina didn't move in time, and now I'm in the same situation," she said. "All I have is cash, clothes and God."

Houston is a landlocked city, an hour's drive from the Gulf of Mexico. Besides Houston's 4 million people fleeing, as many as 2 million were trying to get out through Houston from the coastal side.

In Galveston County along the Gulf, authorities set up three evacuation zones, beginning Wednesday evening and staggered at eight-hour intervals, with the most outlying areas to be the first to leave. But people in all three zones left early anyway, further snarling traffic.

From Houston, the main roads out of town: Interstate 10 to San Antonio, I-45 to Dallas, and U.S. Highway 290 to Austin were turned into one-way thoroughfares only Thursday, and even then the one-way flow began well outside Houston.

"There were some weaknesses," Texas Rep. Sheila Jackson Lee, a Democrat, acknowledged to KTRK-TV on Friday. "We could have fixed some of the elements ... a fuel truck that works, a mechanical system that works, and opening the contraflow," the term emergency officials use for routing all lanes in one direction.

Later in the day, Jackson Lee told The Associated Press the state should have asked the Federal Emergency Management Agency for supplies. "I'm marching people all over looking for gasoline," she said.

Republican Texas Gov. Rick Perry said Friday's decision to order one-way flow came after the storm, originally on a track south of Houston, changed course and headed toward Houston instead.

"It's not perfect," he said. "I wish I could wave a magic wand and somehow transport people magically from Houston, Texas, to Dallas or other points, but that's not the fact when you have the type of congestion that you see in the state of Texas on a daily basis."

He added: "I think when you look behind later, it will be almost miraculous that this many people were moved out of harm's way."

State emergency management coordinator Jack Colley said 2.5 million to 2.7 million Texans had already been moved out of harm's way, and the governor said 25 buses would canvass Beaumont, looking for people still trying to get out.

By midday Friday, lanes were restored to normal traffic. County Judge Robert Eckels said traffic had cleared and authorities needed lanes in both directions for emergencies. Still, many drivers were stranded for hours beyond Houston's suburbs. Emergency crews roamed the roads, taking the last marooned motorists to shelters.

Before the late 1990s, emergency management officials were in charge of evacuations, and transportation engineers had little interest.

Rita and her hellish predecessor, Katrina, come in the new age of terror, as authorities try to draw up plans for clearing out cities in the event of deadly strikes with unconventional weapons.

Still, experts say the massive coastal zone that needs to be cleared of people before a major hurricane is far larger than the area to be evacuated after an industrial accident or a terror attack.

In the event of a nuclear accident, federal rules require the evacuation of a 10-mile radius around the plant. After a so-called "dirty bomb" nuclear detonation or the release of chemical or biological weapons, only the region immediately downwind of the release point would have to be cleared.

Brian Wolshon, a professor of civil engineering at Louisiana State University, said Texas officials "will probably see there were things they could have done better."

But he added: "It's not economically or environmentally feasible to build enough roads to evacuate a city the size of Houston in a short time and with no congestion. It's just not going to happen."