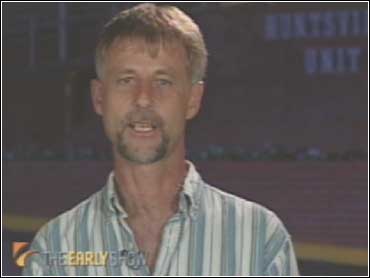 Sixty-two-year-old Betty Lou Beets has become the fourth woman executed in the United States since the Supreme Court allowed the death penalty to resume in 1976.

CBS News Correspondent Hattie Kauffman reports the convicted husband-killer refused a last meal and did not make a last-minute confession.

There were no Beets family members present at her execution.

She claimed she killed her fifth husband, Jimmy Don Beets, because he beat her, but prosecutors dubbed her the "the black widow" and claimed she was after his insurance money. She was charged but never convicted of killing her fourth husband, and she shot and wounded her second husband.

Jimmy Don Beets' son Jamie, who witnessed the execution, told CBS Early Show Anchor Julie Chen that the woman didn't look remorseful or frightened as she was strapped to a gurney in the minutes before her death.

He said, "She really didn't have no expression on her face at all."

"I just kind of focused on my dad. I seen my dad's face. I knew that he was smiling and it was over now."

He said he thought his father would be glad about the execution. "I think my dad would want this just to be over for me and the family."

He said, "I needed the closure. I needed to finish this, to stand up for my dad and let people know what kind of man he was. That he was a good person and that he didn't beat nobody."

He said that after the execution, "I felt a lot of burden off of me. It's just like a lot of weight off me."

A statement from Bush prior to the execution said, "After careful review of the evidence in the case, I concur with the jury that Betty Lou Beets is guilty of this murder...I concur with the recommendation of the Texas Board of Pardons and Parole and will not grant a 30-day delay."

The bodies of Beets' last two husbands were found buried in the yard of Beets' mobile home in Gun Barrel City, Texas, in 1985. Both men had been shot in the head several times.

Betty Beets was charged with killing both men, but after she received the death penalty for the murder of Jimmy Don Beets the other case did not go to trial.

She denied murdering the men, but her children testified against her. Prosecutors say she killed Beets to collect his insurance and pension money.

Beets also pleaded guilty in 1972 to a misdemeanor charge for shooting and wounding her second husband, Bill Lane.

In a tearful plea to spare their mother's life, earlier this week Beet's daughters displayed pictures of a battered and bruised woman to the state parole board, claiming she had been severely beaten by all of her husbands.

"I wish to God the jury had heard the truth about my moter," said daughter Faye Lane.

Anti-domestic violence advocates and human rights groups asked Bush to spare Beets' life because she supposedly was abused by her father and all five of her husbands and received poor legal counsel in her trial.

Beets was the ninth person to be executed in Texas this year. Texas has scheduled 13 more executions this year.