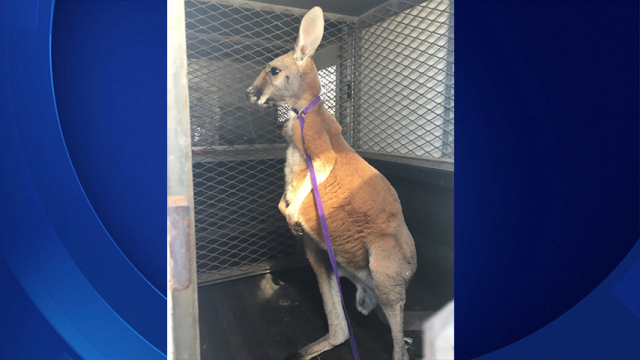 GRANBURY, Texas - Hood County deputies came across a kangaroo in the road on Feb. 10 after responding to a call about a wild animal, reports CBS DFW.

Calls about cows, horses and other livestock are common in the area, but deputies described this case as "bizarre" to say the least.

"We need Marlin Perkins out here to narrate some of our calls," laughed Hood County Jail, Sheriff's Office Lieutenant Johnny Rose. (Marlin Perkins was an American zoologist best known as a host of the television program "Mutual of Omaha's Wild Kingdom" from 1963 to 1985.)

The kangaroo was hopping down a North Hood county road when deputies found it. They weren't quite sure what to do but managed to put a leash on the kangaroo. It gently hopped right into the animal control truck when coaxed.

The kangaroo's owner claimed the pet a short time later. Only dangerous exotic animals are regulated in the county, so no charges were filed.