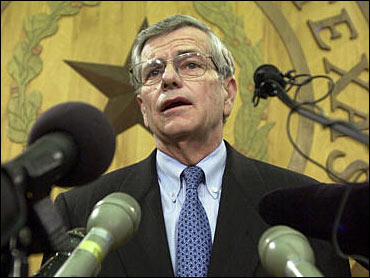 Democrats who fled to a Holiday Inn in Oklahoma to thwart a Republican drive to redraw the state's congressional districts spent their second day on the lam Tuesday talking to jovial constituents who made the trek across the state line to show their support.

The constituents brought fruit baskets, balloons and cookies for the House Democrats, two days after they sneaked out of Austin amid a heated battle over a GOP redistricting plan. Three Democrats returned to the Capitol on Tuesday, but Republicans were still denied a quorum needed to conduct business.

The mood was subdued in the historic chamber Tuesday, with Republicans pleased to see a few Democrats stream in. One legislator had organized a "behind-the-scenes" tour of the Bob Bullock Texas History Museum, not far from the Capitol.

Republicans had constructed signs and gimmicks ridiculing their colleagues. They plastered the Democrats' faces on milk cartons, and Susan Weddington, chairwoman of the Republican Party of Texas, borrowing from the "most wanted Iraqi" cards, announced she had playing cards featuring the missing legislators.

The defiant Democrats remained at the hotel in Ardmore, Okla., about 30 miles north of the Texas border and about 270 miles due north of Austin. They met privately in a hotel conference room to discuss school financing, homeowners insurance, the state budget and other issues.

Several Texans traveled to Oklahoma to give their support, including Sharon Copeland, who lives about 60 miles away in Denton.

"You guys are my heroes," Copeland said as she threw her arms around Rep. Lon Burnam. "I sure am proud to be a Democrat today. I didn't even know this could be done."

Democrats argue that they are not required by the Constitution to redraw district lines, particularly in a non-redistricting year, and blamed the drive for the Republican plan on U.S. House Majority Leader Tom DeLay.

"We have a message for Tom DeLay: Don't mess with Texas," said Texas House Democratic Legislative Caucus leader Jim Dunnam. "We did not choose the path that led us to Ardmore, Oklahoma. Tom DeLay chose that path."

In Washington, DeLay said the Democratic legislators were "fugitives" who crossed state lines and he'd like the FBI to help round them up, reports CBS News Correspondent Bob Fuss.

DeLay said the Democrats weren't acting like Texans because they "turned tail and ran." He said Republicans, even if they were going to lose, would never do something like that.

Redistricting had been scheduled for debate in the House on Monday. According to House rules, the deadline to preliminarily vote on House bills is Thursday. After that, it would take a favorable vote by two-thirds of the House to get legislation to the floor for a vote. Missing the deadline would stymie several major bills, including a budget-balancing government reorganization proposal.

When the Democrats didn't show up Monday in Austin, House Speaker Tom Craddick ordered Texas Department of Public Safety troopers to find the missing lawmakers, arrest them and bring them back. But on Tuesday, local law enforcement authorities in Oklahoma greeted the Democrats with big smiles and warm handshakes.

"We're here to let them know we support them," said Harvey Burkhart, sheriff of Carter County, Okla. "Nothing's going to happen to them here. I can tell you we're certainly not going to put them in jail."

Craddick said he would not negotiate with the absent lawmakers.

"This week it's redistricting, next week it's the budget, the next week when we get back in it's school finance, that's not the way the process works," Craddick said. "We're just not going to negotiate with them. If we negotiate on this we'll be negotiating on every calendar, every bill, every day."

Each representative will pay for his or her own room and other expenses, said Rep. Garnet Coleman. He said Democrats planned to stay in Oklahoma "indefinitely," but others said the group probably wouldn't stay beyond Friday.

The walkout came 24 years to the month since a group of 12 Texas state senators defied then-Lt. Gov. Bill Hobby by refusing to show up at the Capitol.

Some of the "Killer Bees," as the 12 Democrats came to be known, hid out in an Austin garage apartment while troopers, Texas Rangers and legislative sergeants-at-arms unsuccessfully combed the state for them.