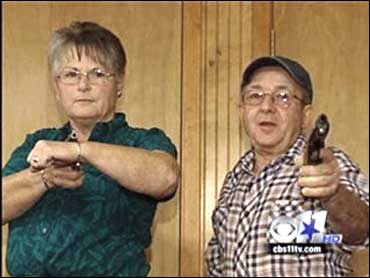 Carol Cavazos of KTVT in Dallas-Fort Worth reports on Texas woman who was unable to reach police on 911 when an intruder entered her apartment. So she called her daughter and son-in-law, who arrived on the scene and held the intruder at gunpoint until police could arrive.

The incident happened in Springtown, a tiny city west of Fort Worth. Lavern Hockett was in bed at 1:30 a.m. when a man kicked in her door.

Hockett then got on the horn to her daughter and son-in-law, Debra and David Turpin, who had a faster response time: 5 minutes. They arrived packing heat.

"I said, 'You take another step, and I'm going to blow a hole right through you," said David Turpin, Debra's husband.

Debra Turpin also had trouble getting help on 911, but eventually police arrived. A 27-year-old man was arrested.

Here's the video and story