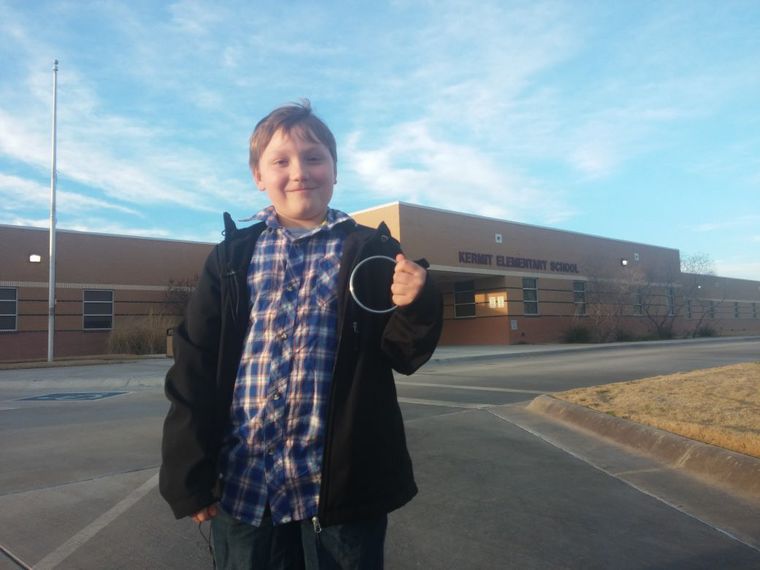 KERMIT, Texas - A 9-year-old West Texas boy was suspended from school after telling a classmate he could make him disappear with his "Hobbit" ring, reports CBS affiliate KOSA.

The parents of Aiden Steward told the station that their son, who is in fourth grade at Kermit Elementary School, had recently watched the "Lord of the Rings" movie and was acting out a scene at school and pretending that he could make other students disappear.

"He likes magic tricks and all the kids in the school know him for his magic tricks," said the boy's father, Jason Steward.

Jason Steward said he couldn't believe it when he was notified by the school that his son had been suspended for allegedly making a terroristic threat.

"I called the principal and he confirmed the story... He said that it is not tolerated, he had the other kids afraid and that we don't allow kids to threaten other kids in school," said Steward.

In a statement, the Kermit Independent School District (ISD) said they could not comment on the discipline of any of their students, but said, in part, "Kermit ISD strives to keep all students safe, and to focus above all on providing them with the highest education. There are many good things going on in Kermit ISD that deserve far more attention than this matter, and for that reason, the District will provide no further comment."

Nine-year-old Aiden Steward reportedly returned to school on Monday and told KOSA that in the future, he will be more careful when he brings magic tricks to school.

According to the Odessa American newspaper, prior to this incident, the boy had already been placed on an "in-school" suspension for referring to another classmate's skin color and for bringing a kids' book about pregnancy to school.