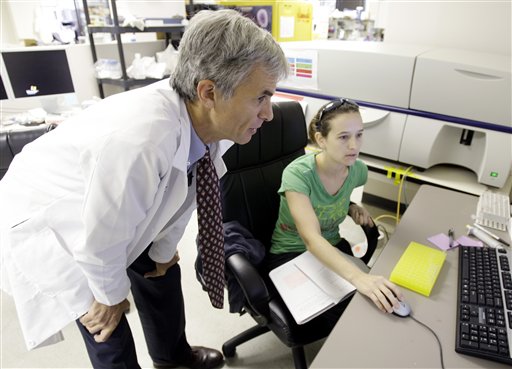 Texas gave birth to the modern oil industry, invented the handheld calculator and sent man to the moon. But can the Lone Star State cure cancer?

Texas is ready to try by investing $3 billion over the next decade in cancer research and prevention, which would make the state the gatekeeper of the second largest pot of cancer research dollars in the country, behind only the National Cancer Institute.

"I don't know anyone that would stand shoulder-to-shoulder with what they're trying to do," said Robert Urban, executive director of the Koch Institute for Innovative Cancer Research at MIT.

That gee-whiz impression is what Texas leaders sought in 2007, when the state created the Cancer Prevention and Research Institute of Texas through an ambitious bond measure approved by voters. Lance Armstrong, champion cyclist and cancer survivor, sold the plan to voters, and Gov. Rick Perry said he dreamed of a day "we talk about cancer the same way we talk about polio."

Texas is now putting out the call to scientists: Come and get the money.

Institute leaders say the money will fund drug developments, gamble on high-risk research turned away elsewhere and attract big-name scientists to Texas. Creating the first statewide clinical trial network, which could give cancer patients more access to experimental drugs, also is being discussed.

But so much money on the table _ particularly in the hands of a state that's new to funding cancer research _ has some researchers worried that politics and backroom deals will play a role in deciding who gets what. The agency will invest upward of $260 million a year on cancer research and $30 million in preventive services such as early detection screenings.

A sagging economy also makes some skittish about whether the state will follow through with funding for an entire decade.

"That $3 billion isn't in the bank," said Dr. Tyler Curiel, executive director of the Cancer Therapy & Research Center at the University of Texas Health Science Center at San Antonio. "What if the money isn't going to be there in the future?"

Curiel is among the hundreds of researchers who began writing applications last month for a slice of the $450 million Texas will hand out over the first two years. The first grants are expected to be awarded by spring.

The state also is hoping to lure more top scientists to Texas with $2 million offers for salary and research and is prepared to offer even more for "superstars."

But once the money is doled out, the agency cautions, don't expect any overnight miracles.

"(We're) not going to bring new drugs to market during the first two years. Nor during the first four years," said Dr. Alfred Gilman, the institute's chief scientific officer. "It will take a good deal of time."

No other state comes close to the amount of cancer research dollars Texas has pledged. California voters in 2004 approved a $3 billion plan for a stem cell research agency, which opponents tied up in court for two years over the ethics of creating and destroying embryos from which the cells could be harvested.

Massachusetts in 2008 passed a $1 billion, 10-year initiative to fund life sciences research, but some have wondered about the viability of that big-ticket endeavor given the state's economic woes.

Texas, meanwhile, is doling out cancer research dollars at a time when funds nationwide have been flat or drying up. The National Cancer Institute handed out $3.14 billion in so-called extramural grants in fiscal year 2008, a slight drop from 2007 and down from $3.25 billion in 2005. The federal stimulus bill gave the NCI an additional $1.26 billion in grant money, but researchers say it's still not enough.

Texas already is no slouch when it comes to fighting cancer. The University of Texas M.D. Anderson Cancer Center in Houston is one of the top cancer research sites in the country, and the state is home to headquarers of Susan G. Komen for the Cure and the Lance Armstrong Foundation.

Dr. Patrick Reynolds, director of the cancer center at the Texas Tech University Health Sciences Center, returned to Texas last year after working at the University of Southern California. He said there was frustration among researchers in California with the state spending billions on stem cell research but nothing to help cancer patients in the short term.

He expects other researchers to flock to Texas.

"I think what people are saying is that (Texas) really cares," Reynolds said. "And by golly, now we got some more resources to do something."

But the new institute has been pinched by the economic slowdown. State lawmakers did not fully fund it for the first two years, leaving $150 million on the table. Institute officials believe the agency may be able to recoup that money down the road, Executive Director Bill Gimson said.

State Rep. Garnet Coleman voted for the initiative, but the Houston Democrat was disappointed that no more than 10 percent of the money is earmarked for preventive services that have a more immediate impact.

Gimson said he could not imagine a scenario in which drug companies would be awarded the money, but Coleman is worried that Big Pharma could still find a way to take advantage of state dollars. He also worried about the institute's transparency when it comes to where the money will be spent.

Institute leaders say the agency's ethics standards will avoid any conflicts of interest and ensure that the awards will be merit-based. The agency will use out-of-state peer review groups composed of doctors and scientists to review the grant applications.

"The people have given us a lot of money," said James Mansour, chairman of the institute's oversight committee. "It's incumbent on us to spend the money and spend it properly."