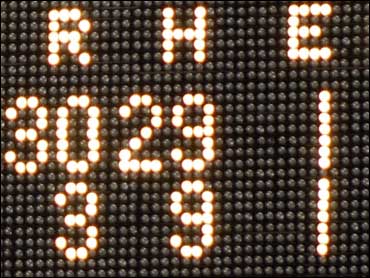 The Texas Rangers had just scored an incredible 30 runs, then had to play the second game of a doubleheader.

What to do for an encore?

"Let's get 31," right fielder Nelson Cruz told his teammates. "Like, what's one more run? One more run is easy!"

Well, not really. After all, before the Rangers beat the Baltimore Orioles 30-3 Wednesday, it had been 110 years since a major league team scored 30 runs in a game.

"This is something freaky. You won't see anything like this again for a long, long time. I am glad I was on this end of it," said Marlon Byrd, who hit one of two Texas grand slams.

Five runs in the fourth inning.

Nine runs in the sixth.

Ten in the eighth.

Six more in the ninth.

When it was all over, the Rangers set an American League record for most runs in a game.

"It was AMAZING in capital letters," said Travis Metcalf, who hit a grand slam after being called up from Triple-A Oklahoma earlier in the day.

Metcalf also drove in four runs in the second game, a 9-7 Texas victory. Metcalf tied a Rangers record for most RBIs in a doubleheader.

Texas didn't quite get the 31 runs Cruz called for, but it did set an AL record for most runs in a doubleheader, topping the 36 scored by Detroit in 1937.

"What am I going to remember about today? Thirty runs scored in one game and having to play another one after that," Rangers second baseman Ian Kinsler said. "It was a very strange day."

The second game was a mere postscript for a wacky opener.

It was the ninth time a major league team scored 30 runs, the first since the Chicago Colts set the major league mark in a 36-7 rout of Louisville in a National League game on June 28, 1897, according to the Elias Sports Bureau.

Trailing 3-0 in the opener of a doubleheader, Texas couldn't be stopped. Finally, the last-place Rangers did something right.

"We set a record for something on the good side of baseball," manager Ron Washington said.

Hours after announcing manager Dave Trembley would return for the 2008 season, the Orioles absorbed the most lopsided loss in franchise history and set a team record for hits allowed in a game (29).

"I'd say whatever we threw, they hit it. It's that simple," Trembley said. "They say hitting is contagious, and that certainly was the case in the first game. I've never seen anything like it."

The Rangers had totaled 28 runs in their previous nine games, including two runs on seven hits in their last two.

"I knew we'd get the bats going, but I never expected anything like this," Washington said. "When the faucet is on, you want it to stay on. You never want to cut it off."

The Rangers sent set a team record for runs scored in a doubleheader — before the second game even started.

"You don't want to be the one to make the out. You feel like you have to get a hit every time up," Byrd said.

Jarrod Saltalamacchia and Ramon Vazquez, the bottom two batters in Texas' lineup, each homered twice and finished with seven RBIs. The last time two teammates had as many as seven RBIs in a game was 1962, when Elston Howard had eight and Mickey Mantle added seven for the New York Yankees against the Kansas City Athletics.

"That was ridiculous. I have never been in anything like that in my life," said Saltalamacchia, who went 4-for-6 with a walk and scored five runs. He came in batting .179 and finished at .262.

Texas' 30 RBIs set a major league record. The Rangers had 57 at-bats, tying the AL mark for a nine-inning game set by Milwaukee in its 1992 rout of Toronto, and finished with more runs than outs made (27).

"Thirty is a football score, not a baseball score," Metcalf said. "It was just a great day."

How the Texas Rangers scored their record 30 runs in the first game of a doubleheader against the Baltimore Orioles on Wednesday: