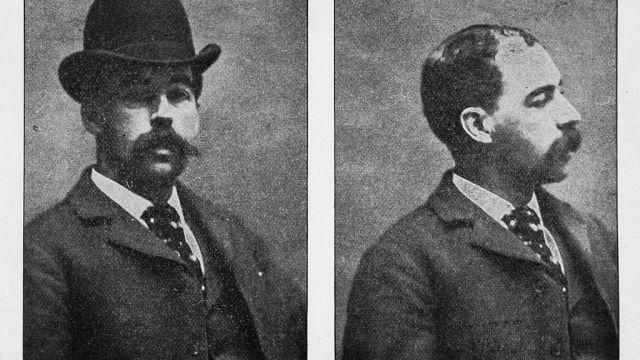 PHILADELPHIA -- Tests show that the remains in a suburban Philadelphia grave are indeed those of a 19th century serial killer, quelling rumors that he'd conned his way out of execution and escaped from prison.

A judge approved the exhumation of Dr. H.H. Holmes' grave earlier this year. Descendants requested it for a series called "American Ripper" on the History Channel. Part of the show looked at whether Holmes escaped, and scientists' findings were revealed in this week's final episode.

Holmes, the pseudonym of New Hampshire-born physician Herman Webster Mudgett, is believed to have killed an undetermined number people at his hotel of horrors during the 1893 Chicago World's Fair. It featured a bizarre labyrinth of windowless rooms, secret passageways, false floors, trapdoors and a vault. Most of the rooms had gas vents that were controlled from Mudgett's bedroom. Many of the rooms were soundproof and could only be locked from the outside.

But it was the murder of his business partner in Philadelphia that led to his conviction and hanging in 1896.

Holmes had left specific instructions for his burial. He was to be laid in a pine box and the box was then filled with cement, buried 10 feet in the ground and covered again with cement.

University of Pennsylvania anthropologist Samantha Cox, who did the forensic science on the exhumed remains, tells the NewsWorks online site that because of his unique burial requests, Holmes' body had not properly decomposed.

She said his clothes were almost perfectly preserved and his moustache was intact on his skull. But the corpse had decayed.

"It stank," Cox told the news site. "Once it gets to that point we can't do anything with it. We can't test it, can't get any DNA out of it."

Holmes' teeth were used to identify him, she said.

WCAU-TV reports the remains were re-interred at Holy Cross Cemetery in Yeadon.

Holmes was the subject of the 2003 best-selling book, "The Devil in the White City," by Erik Larson.