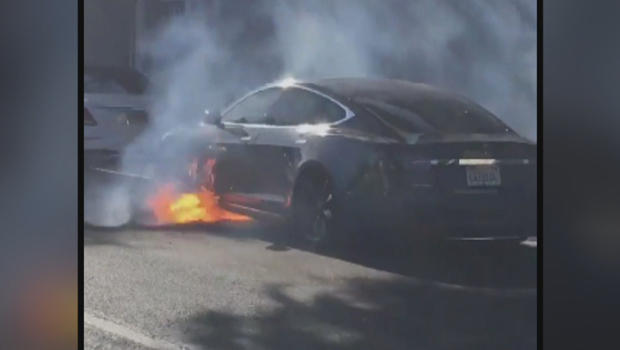 Tesla is investigating how one of its cars appeared to suddenly catch fire on a busy street near Los Angeles. Cellphone video shows flames shooting out of the electric vehicle last week.

Local authorities said it could have been a faulty battery, but Tesla says it's still too early to know exactly what happened.

A Model S quickly caught fire Friday afternoon in West Hollywood, California. Actress Mary McCormack tweeted cellphone video of the fire, saying, "Tesla this is what happened to my husband and his car today …. no accident, out of the blue, in traffic…."

In a statement Tesla said, "Our initial investigation shows that the cabin of the vehicle was totally unaffected by the fire due to our battery architecture, which is designed to protect the cabin in the very rare event that a battery fire occurs."

"Well, of course the video footage itself looks alarmist," Alistair Weaver, editor-in-chief at Edmunds, told CBS News correspondent Jamie Yuccas. "There's obviously been some issues with lithium ion batteries in the past, particularly around cellphones, but electric car batteries are very different. It's a lot of sophisticated technology."

Tesla maintains that it takes extraordinary measures to protect passengers from fires, which it says are at least 10 times less likely in a Tesla than in a gas-powered car.

"We've driven over 50,000 miles in these vehicles and have never replicated this or anything like it, nor have we seen any evidence elsewhere of other cars spontaneously catching fire, so I think it needs more investigation," said Weaver.

Other incidents where Teslas caught fire involved collisions, like a deadly Florida crash last month, or impact with objects on the road, like this 2013 accident in Washington State.

There were no injuries in this latest incident, and Tesla says it is still working to understand the cause of the fire.