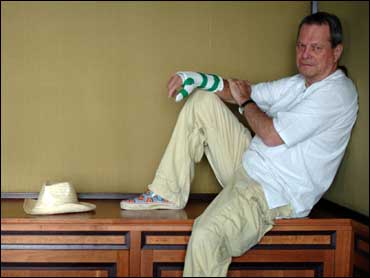 "I'm thinking of suing George Bush and Dick Cheney for making the remake of 'Brazil' without my approval," he told a New York screening audience this week. "Their version isn't as funny, though."

The 65-year-old native of Minnesota who emigrated to England in the 1960s and helped form the legendary comedy group Monty Python, held dual citizenship for three decades. (He married a British citizen and has three children.) This past year, though, he renounced his U.S. citizenship. He sees the current political scene in America – and its extension into the world – to be scarily similar to the Orwellian nightmare of his cult film.

In the film, government agents arrest suspects in hordes, going so far as to charge them for their interrogation, including the electricity applied to their bodies. Detainees who couldn't afford the costs of their torture could apply for loans (at favorable interest rates). The machinery of government-sanctioned torture and data collection became a self-sustaining apparatus.

"It is absolutely frightening," he said of the current political scene. "Homeland Security is just like [the film's] Ministry of Information, because if your job is counter-terrorism, what do you need to keep in business? You need terrorists, and even if they aren't there, we may have to create new ones. It works very well."

Gilliam was in New York to promote his latest film, "Tideland," a dark fantasy about a child using her fervent imagination to escape the horrors of abandonment when her drug-addicted parents overdose. "Alice in Wonderland meets 'Psycho,'" he jokes.

Based on the novel by Mitch Cullin, "Tideland" will be familiar to followers of Gilliam's work – its dreamlike imagery, startling camerawork, and strong lead performances coupled with eccentric characters are touches that are common to his other films. But its subject matter will also challenge viewers: A little girl, alone, must maneuver a dangerous world where her fantasy life, emotions and dreams distort the reality that harbors threats, such as the demented taxidermist down the road. Gilliam thinks it honors the resiliency of children, but such a film that puts a child in seeming peril is admittedly a tough sell.

Despite financial successes with "Time Bandits," "The Fisher King" and "Twelve Monkeys," Gilliam's resume has also featured films that didn't make money, only to become cult favorites later (such as "Fear and Loathing in Las Vegas"). The "cult" tag has earned him a devoted following, but also a reputation for being un-commercial, seeking out projects that test the sensitivities of most audiences.

"I'm not really thinking about the audience as such because I don't know what an audience is," Gilliam said. "So I make things that excite me that I believe in, and I assume I'm somewhat part of the human race, there must be several other people like myself that have similar taste, and I'm relying on that.

"I'm not trying to make elitist films or difficult films, I'm actually trying to reach a large number of people, and I keep failing!"